Home Reviews Look out for the book Olivier Adam – Cliffs 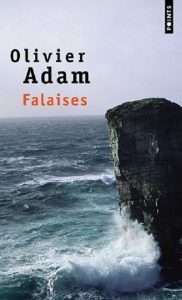 Cliffs, written by Olivier Adams, could be reviewed by bright sides and downsides, ( because, if on the one hand it disappoints, on the other it involves, like his short stories).
I’ll start with the downsides.
Despair, death, suffering are too present. They drench each page, making it difficult even to turn. When you finish the novel, which is only 150 pages long, you realize that the main character’s three loved ones have killed themselves: the mother, whose suicide will lay the foundation for the tragic events of his life; Nicolas, one of the best friend of his brother, and Lèa, one of his lovers. All the others characters are heavy drinkers or terminally ill, living their last days in silence and solitude, or anorexics. Just to name a few. I don’t root for happy endings and forced cheer, I love Carver and his depressing short stories, but the meeting of ghosts in this novel is perhaps extreme and appears a bit forced. It is a long list of commemorative stones. Overlong for a thirty-one-year-old boy. Even the reality, if there is reality in the story, is too heavy if concentrated in 150 pages.
Some characters, like Nicholas or Lorette, are constructed according to an all too evident cliché, . Lea’s death is what Carver would call a cheap trick. Adams writes about her death in the early chapters and he repeats it often, without others signs if not the name of the deceased; thus seeking to create tension and capture the reader from the first page, prompting him to ask: who is Lèa? How did she die? Only in the last chapters does he say what happened. But the game is all in a few pages, without thoroughly explaining to us its importance or if there is one. The Magician’s trick is revealed, you can see the mirror and the magic. It is not magic, what a pity.
Moreover, he fits endless lists into almost all chapters. Particularly, the one on Lorette is almost a photo album: one picture after another. It should be used sparsely, but Adams takes advantage of it. He breaks his prose too many times and he makes it one of those robotic dances so fashionable in 80’s. Its particular melancholic voice would need more descriptions, more relaxing prose and fewer… lists.
On the other side of the mirror, there are some good things.
Sometimes he uses good images, and the descriptions of the sea, of the cliff, of his wife and his daughter, lying asleep next to other, are sweet, warm and authentic. There are some sentences that move the reader: “the sun that bites his cheek” while he is asleep in the car; or the image of his grandmother which “emerges and covers everything like a balsam”. Just to mention a few.
His feelings for Claire –his wife- and Chloè –his daughter- are clean, honest, and he writes without sentimentalism, making the two characters true, although they are behind the curtain all the time.
Adams has a deep and tired voice;, but it still seems to be able to tell thousand of stories before going to bed. A voice that embraces you and that you would embrace.
The plot itself, the idea of reliving childhood and adolescence through one’s own ghosts, is very good. Sometimes, as the mother’s ghost,it even feels as if you can see them. The result is a novel of memories that influence present and spread on the future. It asks questions arising from deep inside the character: how did I survive? How did I maintain my equilibrium? How did I not fall down?
The last chapter is very passionate and, also by virtue of the anaphora, you close the book with some regret. It leaves a strange taste in your mouth. As if it were something tasty, but which had been badly cooked.

Translation by the author with help by Michele Curatolo