Home Reviews Look out for the book Katie Griffiths – The Attitudes 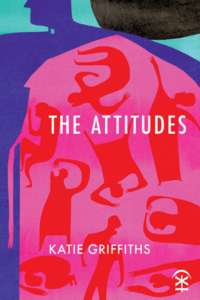 Katie Griffiths is a poet who grew up in Ottawa, Canada  and now lives in the south of England; she is also singer-songwriter in the band A Woman in Goggles, and a member of the collective Malika’s Poetry Kitchen, a community of writers created by Malika Booker and Roger Robinson in 2001, to support and help those poets who have not found space in traditional literature and publishing circuits.

Her latest collection of poems, The Attitudes, published by Nine Arches Press in April 2021, opens with three epigraphs: “I am afraid to own a Body” (Emily Dickinson); “Soul… is always in front of a mirror” (Thomas Moore); “This is the light of the mind, cold and planetary” (Sylvia Plath). These anticipate the themes contained in the 54 poems that make up the collection – poems that dig like a merciless scalpel into the body and mind, bringing to light emotions that do not wish to be revealed, among all the relationship with one’s body, the body that is perceived as a hindrance, a source of anxiety, rejection. “The body shrinks or expands, fills with wrinkles or bursts with health, or suddenly falls ill,” Griffiths said in the film trailer for her book.

A recurring theme in the collection, so much so that the author dedicates to it a series of six poems with the same title, ‘Dough must not not enter the body’, are eating disorders. “One summer/ she learned how to eat.// Not to swallow, just spit – crouch/ with jam pasties  and a paper bag.” Even after a few lines the cry of protest is expressed through the act of fasting: “trying to occupy// less space yet at the same time/ disturb it more”, trying to go unnoticed and at the same time rebel, (‘Dough must not enter the body I’). Here is the clarification of the meaning that Dickinson’s epigraph assumes for Griffiths, who concludes the first of the six poems dedicated to the difficult relationship with food with the words: “To dissolve. To disappear./ Do the holy work.”

This becomes unequivocal in the following poem where the I figure is represented with her head over the toilet, “her white confessor” listening to the sins of her gluttony; in the third: “She holds her body to ransom. […] Food is/ life./ Food is/ death”; in the fourth, the fight with food is conducted every day, the belly “can be empty as a plundered well” or “full as a basket of laundry” but it must also be “tight armour to fend off all blows”; in the fifth “the body is tasteless/ the body is gag”, “the body is tight/  the body is skinflint”. At the end in the sixth no more doubts remain, with the search for an easy kissed rhyme, almost a chant, in contrast with “the shadow” all the negative characteristics of the body emerge: “the body negates” … “decries” … “blenches” … is “suppressed” …  is “outdone”.

It is not always easy to interpret the verses of Griffiths who forces language to bend in a surprising way, often manipulating it, distorting the meaning of the words, to make them express dream images that refer to a tormented personality. Her verses are continually questioning; she asks herself questions which she sometimes tries to answer by splitting herself into two interlocutors, as in ‘Relative Values – Me and Consciousness’ in which “Me” is repeatedly punched by “Consciousness”, the latter overbearing and never having had to survive on fixed wages, while “Me” is “an artist in naïve ceramics, lives in a 1920s terrace and loves to play pontoon”.

The poems in The Attitudes have been composed over a few years so you can see how the poet has grown, and how her understanding and ability to penetrate even the microscopic details of traumatic experiences such as loss, pain and death, have been enriched. The book is rich with different forms, and poems such as ‘Moonbather’ and the title poem suggest that Griffiths is a strikingly original poet. And a playful one too. Griffiths likes to create “a crunching up”, a collision between words and ideas, coining new terms that follow her imagination, juxtaposing extremely distant images with unsuspected links.  She refers to an example in an interview: ‘’I was once reading an article on Médecins Sans Frontières and I began to repeat the sound of these words in my mind, slowly transforming it until I arrived at mes saints sans…, at this point it was necessary to find a term that would maintain a certain assonance with frontières and since I drank a lot of coffee to help me work, I thought about cafetières. In this way, the poem ‘Mes saints sans cafetières’ was born.”

“The poems contain a fragile and incredible Venn Diagram between body and spirit,”  Nine Arches Press editor Jane Commane said during the online launch of the book and I’d  like to conclude this review with some lines from the last poem in the collection, ‘Biography’, that contain the path of a sensitive soul that has given us indescribable emotions: “and her name means/ she who crosses oceans” […], “and her name means/ she who has divided herself”. Crossing oceans, going beyond but not giving up… this is the positive message that the lines of The Attitudes leave us.