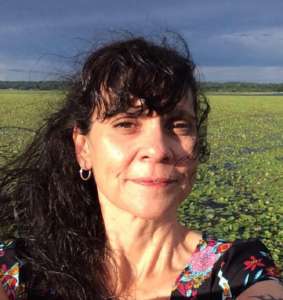 Terri Carrion is a first generation American conceived in Venezuela and born in New York to a Galician mother and Cuban father.

Some of her translation projects include selecting from and editing the bilingual anthology of Venezuelan women writers, Perfiles de la Noche/Profiles of Night, print edition edited by Rowena Hill, for online publication. She also co-translated via the internet with Galician natives, F.R Lavandeira and Loreto Riveiro, the trilingual Galician Anthology of Poetry and Prose, (Galician/Spanish/English) published on BigBridge.org.

Curently she is president of Anhinga Press and Co-founder of the global grassroots movement, 100 Thousand Poets for Change.