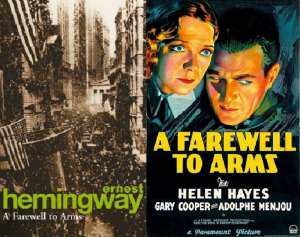 From the very beginning we can guess how much faithfull Frank Borzage’s film will be according to the famous novel by Ernest Hemingway. The film opens upon a small but perfect episode to symbolize war’s ruthless violence: on an ambulance, travelling through mountains, a wounded man warns the driver that someone next to him is heavily bleeding. Sadly the vehicle can’t stop or delay, so the dying man is left to fate’s mercy by those who should have take him to safety.

However, if in the book the protagonist was personally involved, playing the wounded man who warns the driver, in the film we find Lieutenant Frederic Henry sitting on the passenger seat, in another ambulance, unaware of what’s happening. Once arrived at the hospital, he witnesses a scandal, added to the story by the Hollywood screenplay: one of the nurses must left the hospital because of her pregnancy and, to end cruel gossips from others, only a girl gently affirms: “It’s war and she loved him”. The audience knows through this act of solidarity Catherine Barkley, the female protagonist. The film chooses to indulge immediately on the love story and leave the war in the background, summarizing the conflict through few short scenes, without any details. For example the defeat of Caporetto is suggested by a sequence of confused and heartbreaking moments, between soldiers and civilians excaping under the enemy’s bombardment. The choice wasn’t dictated only by the director’s will, but also by the censorship, who wanted to minimize the antimilitarist meaning of the story.
On the other hand, the relationship between Frederic and Catherine is also affected by the rules of Hollywood: the film examines their first meeting, but ignores the novel’s parts in which the two live together whitout being a married couple. The screenplay adds even a scene in which the priest, a dear friend of Frederic, says a blessing for them, making their love less illegitimate. Unfortunately, the film choices make minor characters, such as the priest, Major Rinaldi or the nurse Ferguson simple aids or obstacles in the couple’s path, loosing their intensity.
Where the book was able to draw real characters through words full of humanity and meaningful gestures, the film offers only a simplistic stylization or, in the protagonists case, a hyperbolic exaltation of sentiments. In Hemingway’s novel the representation of war’s merciless absurdity balances perfectly the happiness of a married life, stolen despite unpropitious time and social conventions, and both are described with simplicity and clarity, in order to look alive and real for the reader.
Nevertheless, all these reasons can’t denay the visual beauty of the film: the photography by Charles Lang, who won an Oscar for this movie, transforms the black and white in an infinite range of shades, wrapping the characters with delicacy. Lang also highlights the acting skills of both players, with carefully measured and striking close-ups. In particular Helen Hayes, with her immense and melancholy eyes,  is able to make even the most melodramatic scenes genuinely moving, painting a Catherine innocent and loving as the one created by Hemingway, but much more frail.
The only point where the film loses credibility is the ending, too much different from the book. Trying to maximize the drama, the film chooses to exacerbate the separation of the two lovers and to multiply the difficulties faced by an alone, insecure and frightened Catherine. The crossing of the lake by Frederic to reach her, the long dialogue between the two and the final peace announcement end the film in a climax of exaggerated pathos, which is sometimes excessive or sickening.
Certainly a touching film for the Thirties audience, perfectly suited to the Paramount Pictures melodrama: however, in general, the film adaptation doesn’t make justice to the masterpiece written by Hemingway, showing with too much emphasis the pain, of wich the book gives only a glimpse through few measured words. The film still achieves far superior results in comparison to the other two most famous adaptations, “Farewell to Arms” by Charles Vidor and, uncredited, John Huston (1957) and “In Love and War” by Richard Attenborough (1996).