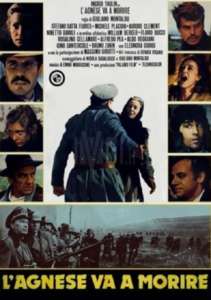 Agnes, despite her age and her physical condition, is a tireless worker. Her husband, Palita, is forced to stay at home because of his poor health and can contribute to their domestic economy only by weaving a few baskets to sell: it is Agnes, with her job as a laundress, who provides for both, rewarded by affectionate and sincere love.

The couple, lulled by their quiet routine, seem almost unaware of the war surrounding them, but soon the conflict breaks into their lives. The Germans come to take Palita, a supporter of the Resistance, and Agnes already knows in her heart that she will never see him again. However, her husband’s companions give her a new reason to live, and she puts all of her perseverance, patience and strength into serving the partisan warfare, slowly becoming a mother to all the men who are trying to win back the valley of Comacchio.
Portraying Agnese on the big screen is an extraordinary Ingrid Thulin. Her sincere acting never makes even the most difficult scenes seem pathetic: the viewer cannot help but suffer and rejoice with her, while a series of close-ups frame every expression that shines from her face. Her male colleagues do not always keep up with her, but Stefano Satta Flores and Michele Placido stand out from all the others for expressiveness and depth.
The other great protagonist of the story, in the novel as in the film, is the landscape. The fields, plains and swamps become now cosy hiding places, now infernal traps, with the passing of the seasons and the sudden changes in temperature. Renata Viganò’s vivid descriptions are replaced by the skillful photography of Julius Albonico, who depicts every moment of the year through wide-angle shots and extraordinary nuances of light. Completing the atmosphere is the soundtrack, composed by Ennio Morricone: melancholy notes accompany the story with the same calm and steady perseverance that Agnes applies to her jobs.
The only element of the story that, unfortunately, the film fails to faithfully convey is Agnes’s slow but steady personal development. In the course of the novel the reflections and inner monologues of the main character offer the reader a realistic and gradual record of an important growth of her awareness. Without ever losing her humility, Agnes learns to judge for herself the events she witnesses and to develop her own, independent thinking. In the film, some secondary characters give voice to Agnes’s inner world, while her evolution is shown only through actions and initiatives, making it less remarkable.
Giuliano Montaldo’s tranposition does not fail, however, to show the real strength of the book: an unusual look at World War II and the partisan struggle, through the eyes of a woman who could have given up, but instead chose to die for what was right.