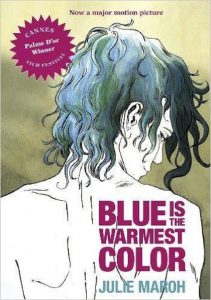 Blue is the Warmest Color is Julie Maroh’s first novel. A graphic novel showing a first work’s tipical flaws, but that finds its strengths in the storyline and in the clear and touching overview. The story is split between present and past, mostly told through Clementine’s diaries. Clementine is a teenager like many others, until the day she remains dazzled by the sight of Emma’s blue hair. Their love grows and struggles with Clementine’s difficulty to accepther sexuality and Emma’s emotional maturity, through arguments and doubts slowly cancelled by passion .

The young author takes full advantage of the comics structure, illustrating the characters’ feelings through compelling sequences, alternated with accurate close-ups and details. Only the present is colored, while the sepia past is cluttered with blue touches, theme of the love between the two girls.The extraordinary, international success turns graphic novel, in the hands of Abdellatif Kechiche, in the catalyst for a project about the life of a French teacher, that the director had been wanted to complete for years.

Léa Seydoux was chosen for the role of Emma long before the filming started, and when Kechiche found in Adèle Exarchopoulos his ideal protagonist, the film that won the Palme d’Or at the Cannes Film Festival 2013 was born.

The film doesn’t keep the graphic novel’s original plot, butit unfolds plainly, looking for and achieving a disarming realism. The direction, never intrusive, takes care of the shots and the editing to bring out the two protagonists naturalness and to show the chemistry between them. The result gives to the audience an almost anatomical study of a feeling, observed in the smallest details from its shy blossom to its decline .

In addition to the romance between the two girls, many elements pass from paper to celluloid, some in a very detailed way, others being barely touched:the school world and the peers reactions in front of a gay partner; the activism in the LGBT world; and the confrontation in the family. But the film uses every clue from the graphic novel in a very different way.

Kechiche drags the two protagonists out of literary romanticism into the reality of the senses: the two figures gain thickness, appetites, new faults and weaknesses, becoming more complex.  The film Blue is the Warmest Color is not about a long and difficult love story, but a burning passion, radiant and ephemeral as the teen age. A magic period of full involvement impossible to recreate because of its overwhelming force, is doomed to fade and end.

The witness of this inevitable evolution is the color blue: at first showingin Emma’s hair and paintings, then following Adele while she quietly walks out, swaying between her dress’s folds. There couldn’t be a more effective representation of the distance between the graphic novel and the film than the comparison between the last shot and the final illustration: the depth of the North Sea is represented by Adele.