Home Literatures Celluloid words One Flew Over the Cuckoo’s Nest 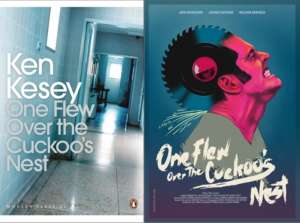 Based on the first novel of the same name by Ken Kesey, published in 1962, it reported one of the hardest situations in human society: the survival inside mental institutions. The writer decided to talk about this thorny topic after his short experience as a volunteer at a hospital in California.
As told in the novel, the dramatic story is about a psychiatric ward, where incurable patients live. They couldn’t endure the conflict with society and their differences weren’t accepted by the iron conformist laws. Therefore they became outcasts and they were segregated in the cruel walls of a ward, led by Miss Ratched, the “Big Nurse”, who rules it with a rod of iron and with subtle cruelty.

“The Cuckoo’s Nest” is a typical colloquial American expression to define a mental hospital. The cuckoo is a bird which doesn’t make its own nest, laying its eggs in nests of other species. We find the same metaphor in the film: the “nest” here is represented by the mental institution, whereas the patients stay for “the eggs” which have been carefully laid in it.

Jack Nicholson, who plays the role of the main character McMurphy, is a troublemaker who enters the mental institution to avoid being jailed. Later he actually realized he was a prisoner as well. Nicholson won his first Academy Award thanks to his amazing performance in this movie.
Besides him we should also mention Louise Fletcher, who plays the role of the nurse Rachted , but also other actors like Brad Dourif (Billy Bibit, a sensitive young man who survived a suicide attempt) and Will Sampson (Bromden, a Native American who pretends to be deaf and dumb and in the book he is the main narrator).

To be fair, no-one in this cast should be left aside: every single actors’ interpretation is perfect.
The director often uses close-up shots to do justice to the facial expressions and to the very accurate psychological acting which strikes the audience directly, almost intimidating it.
It is a kind of natural acting and thanks to this the characters give us the impression that they have never been crazy, but that they gradually have become mad because of the environment they live in.

Music plays an important role in Forman`s films. In this movie we see it as a decent but very gifted actress. In Amadeus, one of Forman`s next movies, which tells the story of Mozart`s life, we realize that there is a perfect love bond between the music and the director.
Jack Nitzsche`s soundtrack didn`t win the Academy Award, but it got the Oscar nomination. The music is always present in every moment of cheerfulness, tranquility and everyday life shared in the madhouse. The music gives a hint of resurrection, starting “piano” and then growing “forte”, it accompanies the routine of the patients, their card-games, their habits, their need of love and serenity. On the contrary the moments of anxiety and uneasiness are characterized by deafening silence and piercing shrieks.

The setting is the same in the whole film, except for a single scene shot in nature, on a boat in the middle of the sea, thought as a contrast to the cold white light of the hospital. This single scene is a sort of break from the usual setting, that is shown in the whole movie without becoming boring.

The film sends many messages and the scenes can be interpreted in many different ways. As many ways as the topics the film deals with: suicide, human fundamental rights, discriminations and psychological control are the most important.
Without any doubt the character of McMurphy shows a strong sense of positive survival inside a dramatic situation and above all the awareness of his mental health he never questioned. It seems he wants to point out the fact that true mad people are the ones who misuse their physical and mental power on the weakest and not someone who is thought to be crazy.
For this reason, McMurphy tends to treat the other patients as healthy human beings, who are normal people, able to understand and to have fun, even if he is aware of their frailty.
The conflict with the Big Nurse becomes inevitable, so that someone identified the two characters as two sides of the same coin: on one side authorities and on the other side protests and anti-conformism.
Miss Ratched is characterised by rough language, self-confidence and she deals with any kind of situation very easily. She has psychological control of the other characters – some of them were admitted voluntarily – and she instills fear and uncertainty in the patients. On the other side McMurphy uses a true, friendly and laidback language.

One Flew Over the Cuckoo’s Nest is important for the history of cinema because it won a total of 28 awards and nowadays, we can find it in the 30th place on the list of the Best American Movies of all times.
This dramatic film is not only a cinematographic masterpiece with a strong psychological impact, but it also has a deep meaning for humanity: it can gently build the public on a devastating topic in an optimistic way and it sometimes moves the audience and it lets it live moments of joy and light heartedness.

Tranlsation by Elena Cammarata and Giulia Pasinelli, edited by Jenovia Amisti Smith
Elena Cammarata and Giulia Pasinelli are students of the Linguistic Sciences and Foreign Letters faculty at the Catholic University of the Sacred Heart in Brescia, Italy; they collaborate with Inkroci in the translation project coordinated by Professor Jenovia Amisti Smith.

Heiko H. Caimi
The album which marks the end of the career for Toto (but at the time of publication Steve Lukather had not yet decided to...

Staff
Lida Yusupova is the author of several books of poetry and prose, including her most recent book of poetry, Shutter (Centrifuga, 2021); The...

Lara Gregori
What is the difference between community and society? As individuals, we recognize that we are part of a society, but every time we reflect...