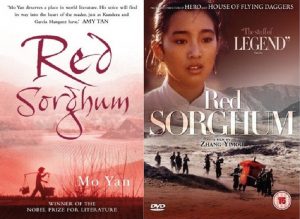 In the North-East zone of Gaomi, the farmers’ life rolls along to the rhythm of the sorghum that sways in the fields. Sorghum is food, wine, a lover’s hiding place and even a grave. Among the elongated stems and red seeds, the 2012 Nobel prize winner Mo Yan (which means “don’t talk”, synonymous of Guan Moye) gives birth to the epic saga of the clan, protagonist of “Red Sorghum”.

Published in five different books between 1985 and 1986, the novel narrates the story of a family in rural China at the time of the Japanese invasion. Thanks to his ancestor’s exploits, the narrator creates a mythical genealogy throughout three generations, that tells of the violent and authentic world of an underdeveloped, suffering and immutable China.

One year after publication of the novel, in 1987 Zhang Yimou directs the film adaptation, winning the Golden Bear at the Berlin Festival and the Oscar nomination as best foreign language film. The movie focuses on the love story between the carrier Yu Zhanao and Jiu’er, the young and beautiful betrothed of master Li Datou, the rich (leper) owner of a famous distillery.

After having lain with Jiu’er between the sorghum stalks, Yu decides to kill her husband before he was able to infect her; in this way, the young woman inherits from the dead groom the huge house and the distillery where, thanks to the help of the labourers, she starts again the production of sorghum wine.

The relationship between the young heiress and the stubborn Yu is not a bed of roses. Their pride leads them to clash and make peace violently and eventually to commit sensational acts; so that Yu, in order to show his contempt for Jiu’er, urinates in the amphorae containing the new wine and, thanks to an unknown chemical reaction, makes the best liquor of the region.

Soon the life of the community is upset by the Japanese occupation. In revenge for the death of Uncle Liu, the loyal administrator, flayed alive by the invaders, Yu organizes an ambush which, by a strange stroke of destiny, will bring about Jiu’er’s death, in a finale where the blood, the sorghum and the sky become dyed with the same shade of red.

The authors of the film intelligently decide to operate a selection from the large amount of material offered by Mo Yan: the script, in fact, is concentrated only on the first two chapters of the novel (“Red Sorghum” and “Sorghum Wine”), without dealing with the three final chapters, and it ends with the dramatic scene of Jiu’er’s killing. The result is an intense work, able to avoid the risk of resulting tasteless and diluted compared with the book.

Apart from the ellipsis of an important portion of the story (the feud between nationalists and communists, after the Japanese retreat, the dogs’ siege and Jiu’er’s funeral), the main narrative difference between the two versions is the management of the temporal element. In the movie the events are positioned in a linear manner, recomposing the chronological puzzle hatched by Mo Yan in the novel; where, in fact, the events fluctuate in different temporal planes, placed arbitrarily by the narrator, thanks to an abundant use of analepses and prolepses which produces an effect of timelessness, as if the story were a myth out of time. Precisely because of its epic dimension, the use of the flash-forward and the presence of popular beliefs and shamanic rituals, some have compared “Red Sorghum” to “One Hundred Years of Solitude” by Gabriel Garcìa Marquez and it is considered a masterpiece of the flourishing twentieth century tradition of magic realism.

Inevitably, the film loses the extraordinary stylistic richness of Mo Yan who, in the novel, thanks to a masterly use of the similitude, creates a series of analogies whereby the characters of the Chinese countryside become one with nature itself.

There are numerous moments in which we can recognize this osmosis process (enforced by stylistic features) between the human world and that of nature: for example, men and stray dogs eat each other during the long siege, each drawing strength from the other in a brutal fight for survival, while the blood “soft and smooth as a bird’s plumage” from the dead merges with the sorghum. This very intimacy (both physical and linguistic) between mankind, plants and animals is the key to the vision which emerges from the pages and the sequences of “Red Sorghum”: mid twentieth century China is frescoed by Mo Yan and Zhang Yimou as an ancestral, poor and uncivilised world, where the same millenary acts are repeated under the raw law of survival, but which, with all its pain and misery, remains close to the most authentic side of life. The characters of “Red Sorghum” become the symbol of an existence which draws nourishment from the earth and which would be polluted far away from it. Just like Yu and Jiu’er which, as the narrator says, ploughed the clouds and sowed the rain in that sorghum fields, enriching the interesting story of the North-East zone of Gaomi with a moment of happiness. My father was conceived with the essence of the sky and of the earth; he was the fruit of intense joy and suffering.