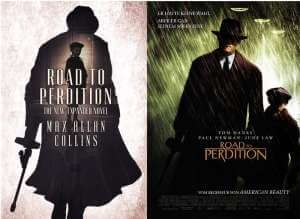 USA, 1930s. Michael O’Sullivan is a good family man and leads an apparently secluded and devoted life. While Michael goes to work, as every day, one of his two beloved sons decides to hide himself in his father’s car and witnesses a brutal Mafia-style execution.
Thus he learns that his father is actually a notorious killer. Unfortunately, the boy is discovered and Mafia rules don’t let witnesses of paybacks live.
Father and son escape together but the rest of their unaware family is executed. That’s the beginning of a dark and exciting story of revenge and retaliation, with no holds barred, narrated in first-person by Michael O’Sullivan’s son. Their final destination: Perdition, the town where the two of them hope to find their salvation.

In Road to Perdition, novelist Max Allan Collins deals again with comics, and does this with rare incisiveness. He represents the world of US Mafia during Prohibition with precision and effectiveness, highlighting the importance of family and the strong bond with a certain Catholic concept of life that is common to the Irish and the Italians. The choice of a child’s point of view gives us a captivating narration, and makes it easy to side with his father.

Thanks to a syncopated rhythm, dry dialogues and piercing film jokes, Colling makes this long story of gangsters and education memorable. The illustrations by Richard Piers Rayner are priceless: he perfectly draws locations and characters and is able to make the atmosphere touchable, thanks to a skillful use of contrasts which pays attention to details.

The work inspired the overrated film “Road to Perdition” (directed by Sam Mendes), a typical Hollywood product, dull and mediocre, which betrays the immediacy of the story in favor of usually silly and slick tones.