Home Literatures Celluloid words The diving bell and the butterfly 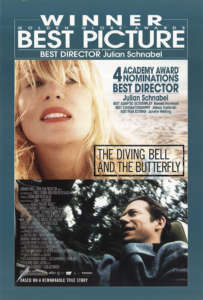 A book is one of the most powerful weapons for human beings, and Jean-Dominique Bauby has understood that quite well. Editor-in-chief of Elle magazine, Jean-Do is an exuberant, dynamic man, always looking for new experiences, but on December 8, 1995 a stroke upsets his life forever, leading him into a deep coma for three weeks. When he woke up, he realized that he had lost every motor function, from head to toe, stuck in what medicine calls ‘locked-in syndrome’. Completely imprisoned in his body, his brilliant mind emerged from that diving bell that prevents any direct physical interaction with the world, or nearly does: in fact, Jean-Do at least managed to move the left eye and began to communicate through a blink of eyelashes. While the orthophonist recited the alphabet, with that blink, he indicated one letter at a time, composing words and whole sentences. He subsequently decided to tell his experience in a book, letting his thoughts wander like a butterfly.

‘The Diving bell and the butterfly’ is the autobiographical work of the French journalist who decided to rediscover himself: through his illness he was reborn allowing him to reflect on his own existence and on missed opportunities. In spite of his experience, he remained alert and ready to be ironic about his surroundings, looking at the world from the small crack of his eye. Every morning Jean-Do thought of the chapters to be dictated to his publisher’s editor, who patiently transcribed his every reflection. From the terrace of the Berck-sur-Mer hospital, which he used to call Cinecittà, he decided to fight for his freedom and, after an initial refusal to see his loved ones, he regained his identity through their voice. The book was eventually published in 1997, three days before the author’s death.

In 2007 the American director Julian Schnabel masterfully directed the film adaptation of Bauby’s book, winning the award for best director at the Cannes Film Festival, and for best foreign film at the Golden Globes. Through a meticulous work of perspectives, the director was perfectly able to alternate the protagonist’s point of view (Mathieu Amalric) with that of the outside world, creating a masterpiece that does not resort to sentimentality. The film remains faithful to the book, returning the same ironic vivacity that can be found in the journalist’s words. In the final part, the flashbacks of that lavish existence that cannot return come more often: memory and imagination are the only means that Jean-Do has to live, the only keys to open his diving bell.