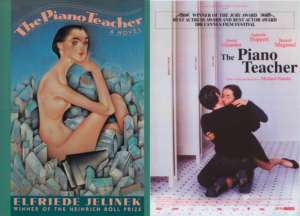 Erika Kohut is an excellent middle-aged piano teacher at a Vienna music conservatory. Despite her mature age Erika’s life is constantly controlled, day after day, by her oppressive mother, leaving the main character unable to make any personal decision. The cumbersome mother has always decided for her, starting from Erika’s job, her clothes to wear, arriving to the people to hang out with. This morbid relationship between the two women has always prevented the daughter’s independence; Erika has consequently been forced to hide her strong and unspeakable sexually repressed nature. As a matter of fact, the piano teacher pours out her erotic fantasies through different perversions, including self-mutilation and voyeurism, although never abandoning an apparently moral conduct. Just when she thinks finally having found a balance, an engineering student and brilliant pianist walks into her life: his name is Walter Klemmer. Between the young boy and the adult woman soon begins a sadomasochistic relationship, from which the student does not want to step back.

The 2001 movie “The Piano Teacher” is directed by the Austrian Michael Haneke. Considered one of the European masterpieces of the new century, the film wins different awards, most notably the Grand Prix at the 2001 Cannes Film Festival, with the two lead characters, Huppert and Magimel, winning Best Actress and Best Actor. The subject is based on the 1983 namesake novel written by Elfriede Jelinek, who is the 2004 Nobel Prize in Literature recipient. Thanks to this work the Austrian writer gains unexpected success: Erika’s obscene experience results in an emancipation from her own existence, by using a pervert sexuality which shows the woman’s inability to build relationships. The piano teacher is always searching for a personal identity, at the same time it’s sexual and social. Through a rough and cruel writing, rich in periphrasis, Jelinek makes a bold statement about the superficial and only apparently moral Austrian middle class. Strict in public but uninhibited in peep-shops of the squalid Vienna’s suburbs, Erika silently behaves in order to create her perverse freedom.

While in Haneke’s movie the main characters is introduced as already enslaved to her instincts and weaknesses, in the book, Jelinek inserts different episodes from the woman’s youth. Particularly in the first part of the novel, the author explains how the then little girl creates this unhealthy relationship with her mother, since the very beginning: it is when the father leaves the family to be carried to a local clinic few years later. Due to problems mainly related to cinematographic timing, the director cuts off this scene; anyway, Haneke is able to create an additional introspective. Not only he can capture the tragic nature of the events, but also the cruel and suffocating context in which the society of appearance and good manners lives. In this way, like in all his cinematography, the director uses a cold image that gives to the setting an even more terrible atmosphere. As a consequence, Haneke can finally express the brutal seriousness underlined by Jelinek with her harsh writing.