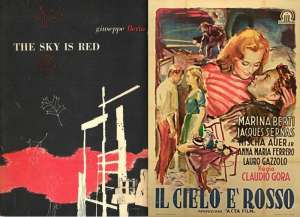 1944. In the slum of a rural town, Carla and Giulia, hardly more than children, live together with their grandma. Carla is tough, determined and, despite her young age, unscrupulous; Giulia is nice and shy, having suffered from the abandonment by her mother.
One day Carla asks Giulia to help her elude their grandma’s surveillance and meet Tullio, a seventeen-year-old whom she has a crush on. But, while the two young girls are with Tullio, the neighborhood is bombed.
Left alone in the world, the three teenagers take refuge in a dilapidated building in an area that hasn’t been cleared. Carla prostitutes herself, Tullio becomes a thief and Giulia stays at home where she takes care of Maria, another little orphan. Soon the group is joined by Daniele, a mechanical aid hired by the Americans who falls in love with Giulia. However, peace does not last long.

It’s a gloomy novel, imbued with a deep pessimism, which expresses a strong, piercing pain and describes a desperate, brutalized humankind, for whom there seems to be no escape, just as the youth of the protagonists seem denied.
Berto’s style, while resulting stark, enchains the reader to the events that involve the characters, who all deserve a sorrowing solidarity.
Despite being a little-known piece of work among those who deal with the tragedies of World War II, it is worth reading and rediscovering; also. it is one of the few politically “unaligned” novels. Giuseppe Berto prefers focusing primarily on the heart-breaking story he is telling, without however overlooking notations of a social nature and psychological insights.

In 1950 the novel was turned into a movie (Il cielo è rosso – The sky is red), directed by Claudio Gora, written by the director together with Cesare Zavattini, Leopoldo Trieste and Lamberto Santilli and played, among others, by Jacques Sernas, Marina Berti, Amedeo Trilli and Anna Maria Ferrero). It appeared quite clunky, revolving above all around the character of, but the public morality of that period imposed several changes to the plot, not least an increase in the age of the characters and an opposite than was imagined by Berto.