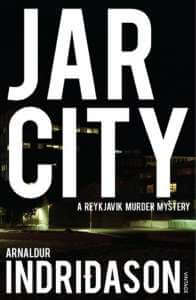 Reykiavík, Norðurmýri district. The dead body of an old man is discovered by his neighbours and an old picture of a little girl’s grave is found hidden between two drawers of his desk.

So begins the investigation of the Icelandic police which pursuing faded clues that reveal a terrifying past from which tragic events, aggressions and abuses emerge.
The investigations are led by chief of police Erlendur: he is the usual Nordic antihero with an unhealthy lifestyle and full of personal problems, amongst which a drug addicted daughter with whom he has a really bad relationship.
Jar city is not lacking in dramatic turns of events, but these revelations somewhat insult the crime novel reader’s desire for resolution. There are too many fortunate coincidences and too many fortuitous circumstances which allow the author to tie up all the loose ends. Somewhat like in second rate detective stories, where you discover that the presumed killer has a cast-iron alibi, because it is his second cousin once removed, identical to him in looks, who commits all the crimes.
The characters in this book, which is very popular also beyond the borders of Iceland, appear reserved, introverted, and even crazy, and yet they are considered normal by others. They are steeped in preconceptions and convictions which verge on paroxysm. The dark and livid landscape itself provides an apt backdrop. What emerges is an excessively heavy picture, which sometimes appears too black and white, or at least unlikely.
Inðridason’s Iceland is a backward world, a world of the past where the idea of a cold and ‘evil’ science goes hand in hand with a reactionary concept of genetics, as if the sins of the fathers were necessarily visited upon the sons, a “sick blood” which has to be eradicated.
We would not be too surprised if Lombroso appeared somewhere in the book to tell us that the size of the killer’s skull left no room for doubt.
If we wanted to interpret the novel in a less mechanistic way, we could say that there is an almost sacred way of looking at reality, and this reality seems to be destined for an amazed intangibility, because any intervention would only be a profanation, rupturing the entire equilibrium.
It is, in short, a “forced” crime novel, but yet we can see a very delicate and sensitive description of the relationship between Erlendur and his daughter Eva Lind. A complex relationship that develops alongside the investigations. Erlendur turns out to be a father who underestimates himself, but who manages to protect his daughter and to help her, doing the best he can, even clashing with her. And also Eva Lind manages to find her way into her father’s surly and unfathomable heart and to get him to look at himself.
So the novel’s strength, in my opinion, lies in a completely different investigation, that is not related to the murder whatsoever, but to the psychology of the relationship between a problematic father and a problematic daughter and their gradual closeness.
Maybe it would have been better if this aspect was the cornerstone of the novel, and Erlendur’s police investigation was there just as a backdrop, or in other words, if this book was not a crime novel.

Arnaldur Inðridason was born in Reykiavík in 1961. He graduated with a degree in history and then he worked as a journalist and film critic, before deciding to write crime novels.
Arnaldur’s books have been translated into many languages and are very popular in Europe, especially in Germany.
Inðridason received several prizes, among which the Glass Key award twice (literature prize for the best Nordic crime novel writers in Scandinavia): in 2002 right for Jar city, and the year after that for Silence of the Grave.
He won the Crime Writers’ Association Gold Dagger Award in 2005 also for his novel Silence of the Grave, and in France he won the Grand prix de littérature policière.

A film version with the same name, directed by Baltasar Kormákur, premiered in Iceland in 2006 and in 2007 it won Crystal Globe Award in Karlovy Vary International Film Festival.