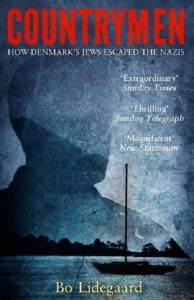 It was1943. Nazi Germany invaded Denmark.

The country was worried, oppressed and sometimes inclined to please the enemy. Popular forms of resistance with sabotages and isolated attacks, though not much substantial, due to the circumstances, were strongly discouraged by local authorities for fear of massive retaliations. Danish prime minister Buhl hideously requested to denounce saboteurs to the Nazi authorities. This was the situation at the time.
However, when the possibility of a systematic a sweep of Jews became a frightful certainty day after day, the Danish rebelled against it.
Disobedience does not develop facing the enemy in a direct clash that surely Denmark could not allow, nor through armed groups of partisans, but through a silent and strategic revolt, still protective and unanimous, which occurs by word of mouth.
This attitude prepared the Jewish community and later it protected it by any means, hiding it from the invader; we also have to consider the fact that deportations in Denmark appeared particularly aggressive, since they were carried out in a swift and clearly unlawful way.
From one day to the next, friends and acquaintances became refugees to be saved and helped on their road to safety to neighbouring Sweden, which thanks to its economic and strategic cooperation with Nazi Germany was considered to be relatively ‘safe’. Sweden, in fact, exercised control over the press in order not to spread criticism toward Nazi atrocities, exported war goods and allowed military transit towards Norway, another victim of an even more violent occupation. Thanks to its so called ‘neutrality’, which was rather a form of cooperation, Sweden was subjected to less interferences in its internal politics and was able to take its liberties; so, when an attack from Germany looked unlikely to happen, it opened its borders to an increasing number of refugees.
Eventually, 6500 Danish Jews on 7000 would manage to reach Sweden and be saved from deportations.
This substantial historical work is a very interesting overview; without being rhetorical it tells about an odd occupation, in a country that, contrary to all the others, never allowed an anti-Semite propaganda, neither before the invasion nor during the real occupation. It was an occupation that, quoting Lidegaard was “behind the formal politeness between the occupying power and the occupied nation [sees] both the king and the people [showing] their contempt through quiet rejection – dubbed the the cold shoulder making sure that the intruders were not treated as guests”.
The unusual nature of Danish occupation may be perceived as even stranger than Sweden’s political choice, which was cooperating with the regime without entering the war. Denmark pursued a diplomatic last ditch effort game, a continuous arm wrestling where king and government accept, ask, fight, overlook, face situations and demands which are different and always more pressing day by day: Denmark accepted German occupation provided that it did not enter the war and did not interfere with internal affairs. Thus the formally independent government could reject any arrangement regarding Danish Jews.
Germany had obviously many advantages in this ‘political cooperation’ however, this peculiar situation left Denmark with more freedom and an ample space for manoeuvre in terms of its silent, formal, “pragmatic” and “not at all heroic” yet very effective resistance. One fact that one has also to bear in mind is that communists were surely not a priority for the Danish government, since Danish authorities proved to be particularly steadfast in facilitating their deportation.
Lidegaard starts offering us an overview about how the so called ‘Jewish question’ was faced in Denmark on a political level, and after giving us the basis for the analysis, he goes on picturing historical setting of the German occupation through the first combined attack by land and sea in history. The story and History now take shape in this interesting report equipped with precious images and photographs that let us really see people and facts.
[* * *] Bo Lidegaard was born in Nuuk, the capital of Greenland, in 1958. After gaining a PhD in History, he began a long career in diplomacy and from 2011 he devoted himself to journalism as the director of Politiken, one of the most important Danish newspapers. This very recent work is going to be published soon in nine countries.