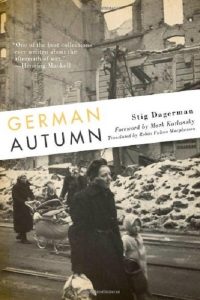 This short novel can without doubt be defined as journalism; it is, however, a kind of journalism we are not accustomed to, a journalism that is also Literature.
And this is all the more significant if we consider that what is being denounced is precisely the hypocrisy of journalists, their presumption of being the voice of democracy, where the démos is however clean, well-fed and affluent.

In a collection of notes on his two months travelling in Germany, Dagerman displays an intelligent ability to observe and report with ferocious intellectual honesty and brave freedom of thought. His reportage is unlike any other of that period: in his accounts of social inequity and bitter divisions, the young author communicates all the disappointment of the anti-Nazi revolutionaries who hoped that 1945 would bring justice to Germany. It is not at all similar to the chronicles by reporters of newspapers of the occupying countries: Dagerman does not look for vindictive confirmation of hate, nor try to justify the unjustifiable: he looks at things with penetrating, wise and vividly anarchic eyes and with an involvement that ironically becomes lucid detachment, with a rationality of honesty and compassion. Dagerman’s most evident virtue is the anarchism of his mind and spirit. Perhaps this is what makes German Autumn a wonderful book. Anarchy is the perfect synonym for humanity.
We should also probably take into consideration the inevitable naivety of Swedish eyes observing a post-war period; this filter, mixed with Stig Dagerman’s acuity and intelligence, both proudly and compellingly revealed to the reader, makes this book a masterpiece.
Single characters and single stories are poetically outlined against a background of cold, wretchedness, and a complete absence of hope.
Dagerman has us witness the trials of the pointless, rigged ‘de-Nazification tribunals’, huge “paper mills” where trivial cases were manipulated, while the real Nazis managed to escape and settle down in the comfort of the “Allied” countries. The Spruchkammer where the trials took place (defined as interesting theatre performances of great documentary interest but totally useless for the purpose of  de-Nazification), proved to be an arena for Americans to prepare the emergency exit of Nazi party officials from Germany and a stage for Jews who, for two hundred marks, testified the falsity of accusations made against those who, only days before, had been their persecutors. These are the trials as told by Dagerman. In Deutschland ist nix mehr los, it was no longer possible to remain in Germany, as if this situation was even more hateful than during the Hitler period.
It is customary for a reviewer to quote a passage, even a short one, of the reviewed text, in order to let the work speak for itself through the beauty of its words, but above all through what the words represent. Well, I believe that the acid test of being in the presence of extraordinary literature is when, in order to give a particularly beautiful or representative example, you feel the need to quote the entire work: all of it, whole, perfect and complete.
So, almost reluctantly, I have chosen these words to give you a vague idea of the sound of Stig Dagerman’s voice: “People hear voices saying that things were better before, but they isolate these voices from the circumstances in which their owners find themselves and they listen to them in the same way as we listen to voices on the radio. They call this objectivity […]. People analyse: in fact it is a kind of blackmail to analyse the political leanings of the hungry without at the same time analysing hunger”.

Stig Dagerman was born in 1923 in a small Swedish village not far from Uppsala. When he was only 13 he became involved in libertarian political activism, which left a vivid mark on his literature. In 1945, aged just 22, his first novel Ormen (“The Snake”) was a critical and popular success.
German Autumn, a collection of his articles written in Germany in 1946, was published in 1947 and earned him a place among the greats of literature.
He committed suicide aged just 31, by inhaling the exhaust fumes from his car’s running engine.