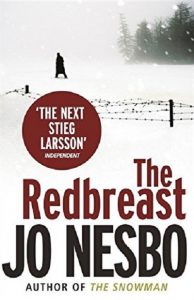 As always, when one browses through the pages, smells the paper, has a look at the back cover of a Nordic crime novel, they wonder why this should be different from the others. Given that nowadays the Scandinavian thriller is a cultural phenomenon, there is always the fear of being disappointed and to discover that, besides being fashionable there is very little substance.
This is definitely not the case.
Dead bodies and traces of arms trafficking are found in a dark Oslo, a city tarnished by neo-Nazis resurgence, naive in underestimating a dangerous climate: all this suggests that something big is about to happen.
Harry Hole has the task to investigate: he is an absolutely anti-heroic policeman, depressed, alcoholic, incapable of normal human relationships, albeit with the necessary and very considerable exceptions.
Adding to that, we have flashbacks, war and military scenes, sections described with a language similar to that of A Farewell to Arms’s Hemingway.
Nesbø reveals an innate sensitivity and a deep ability to penetrate the soul of each character: he immediately makes us partakers of a voluntary abandonment of a simplistic black and white vision on the subject “Second World War”, which unfortunately is frequent, especially during this time.
Even the choice of an atypical character (moreover, already seen a thousand times and precisely in northern European crime novels), often with relational problems and/or drinking issues, is brought forward without persistence anyway, without overloaded or exaggerated features, in a very clever way. We let ourselves be captured by this shady character page after page. Harry is gentle even in his surly and clumsy manners, and his awkward, strange, sometimes, bordeline pathological displays of affection, are heartwarming.
The magnificent flashbacks of the ’40s sometimes enclose scenes of pure poetry, as the one where the tinkling crystals of a chandelier, vibrating because of the bombs’ blast, act as a romantic orchestra for two lovers, who are so self-absorbed that do not hear the war that rages out. And if they do, they do not care.
The chronological change is described so masterfully that when we read these flashbacks, it really seems to imagine the characters in sepia, speaking with the nasal voices of old movies.
The reflections on today’s society go together with this, naturally, without pedantry or that conceited tone that those who force us to open our eyes to the world usually have. Concepts such as ‘treason’, ‘justice’, ‘freedom’, are seen from time to time with different eyes. There is no fear of facing unacceptable truths, those of National Socialism, to live them and feel them on one’s skin, taking for once the perspective of the volunteers who went to fight to support Hitler. This is precisely where the strength of the book lies: trying to figure out how a certain feeling came to be in order to destroy it, to understand that evil is not far away, neither in time nor in space, how it was conceived, grew and devishly delivered.
Jo Nesbø is an intriguing author: born in Oslo in 1960 and graduated in business administration, he is also the voice and the composer of the Norwegian rock band Di Derre. He has written children’s books, worked as a freelance journalist, and he also used to be a good soccer player.
Despite his busy life, nothing prevented him from writing a technically perfect crime novel, in fact in 2000 The Redbrest won the Bokhandlerprisen (a literature prize awarded by the Norwegian Booksellers Association), and in 2004 it was chosen by the Norwegian literary circles as the best Norwegian crime novel of all times.
However, the most striking reflections, are those that are barely mentioned, in non relevant situations in the novel, rather in occasional and superficial conversations. Above all, a sentence uttered by a former Nazi volunteer about the great celebrations for the national day is very striking: “Too much fuss. And too many flags. No wonder Hitler felt close to the Norwegians. Norwegians are hugely nationalistic. We just dare not admit it”.
These small traces, these fleeting flashes of lightning, open our eyes to modern socialdemocracy.