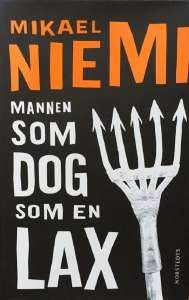 Mikael Niemi is a Swedish writer born in Pajala in 1959. He has written poems and tales for children and young adults, but it is with Popular music from Vittula that he has reached critical and commercial success. In fact, the novel, published in 2000, immediately became a best-seller in Sweden, won the August Prize and has been translated into 30 languages.
Thanks to the integration of segments in meänkieli in his works and his reflections upon it, Niemi made this people’s ethnic and linguistic question known in Sweden and all around the world; it is with The man who died like a salmon, though, that Niemi really tackles the issue at a theoretical, historical and linguistic level.