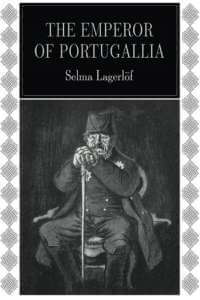 The Emperor of Portugallia is a little masterpiece by Selma Lagerlöf. Of course it could be said that, among the works by 1909 Nobel Prize Selma Lagerlöf – known for epochal writings such as the GöstaBerling’s Saga – this is one of the less significant. In some way it is. Yet this novel predominantly shows the Swedish writer’s skilful writing.
Born in Mårbacka in 1850, Lagerlöf describes the Värmland, her birthplace, that’s the background of a drama set in a rural and ancient society. Even the harsh and hostile nature highlights how the ancient world, despite its traditions and rural values, is permeated by cruelty and greed.
The novel begins with the day labourer Jan, who is about to have a little girl but does not want her.
Surprisingly, after little Klara Gulla’s birth, he’s overwhelmed by a sudden surge of love that’ll never leave him.

As she grows up, their relationship becomes almost symbiotic, his fatherly love reaches unimaginable peaks, and the girl grows healthy, clever and beautiful. She’s so selfless that, when her parents face serious financial problems and risk to lose their house, Klara Gulla decides to leave for Stockholm to find a job.
Here the monstrous, big city’s metal and mechanical gears consume everything, including the girl.
Jan becomes prey of madness, that slowly accommodates him in its motherly and reassuring arms, until he convinces himself that his beautiful daughter has become the empress of a far and imaginary land called Portugallia, where evil and sorrow don’t exist.
Jan is essentially mad, but he’s the only truly significant character. He’s the only one who can penetrate the world with his eyes, not because he has psychic powers – like other characters believe  – but because his madness improved his observational skills: his madness turns out to be a gift, and the readers gently drifts in it, letting themselves being rocked.
This is a sweet and exquisite novel, a moving story that recalls ancient fairy tales.
The love of a father for his daughter, and the madness that can only be caused by the everlasting illusion of love, are the core of the story.
The readers are demanded to look through a double lens: the one of love and the one of madness, inseparable and unavoidable.
Through a very interesting narrative artifice, that Lagerlöf shows to master skilfully, we’re told the story uniquely from Jan’s perspective (though concealed behind a deceiving third person).
The readers feel like they’ve been drawn into another way of thinking, but they don’t realise that’s the developing of the plot that make them think there’s been a shift in the storytelling, that instead has always been the same.
We go mad with Jan until, at some point, we’re struck by the bluntness of reality and we draw away from the suggested point of view.
Lagerlöf knows how to lead us to the delirium of love, and it’s up to us to move away when and how we want, using the signals we want.
And it’s significant that what’s probably the most moving sentence in the whole novel does not minimally concern the relationship between Jan and his daughter, but between his wife and him.
A cold and distant relationship that’s actually softened and sweetened by Jan’s madness: “Jan is not crazy […]. But Our Lord has placed a shade before his eyes so he’ll not have to see what he couldn’t bear seeing. And for that one can only feel thankful”.
Tidbit: in 1925 a film entitled The Tower of Lies was based on this book, and produced in the United States though directed by the Swedish director Victor Sjöström; until not long ago, the film was believed lost, but there seem to be a copy in Denmark.