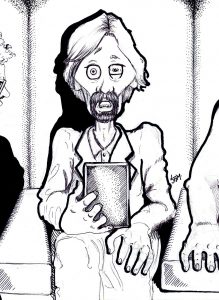 Scene: the crowded compartment of a (filthy, need I say it?) Italian train.

A guy in jeans and a casual jacket is trying to cut himself off from reality by immersing himself in the reading of a novel on his e-book reader.
Station Whatever-you-want-to-call-it. A couple of people get off. For a moment, you can breathe. But it’s just an illusion: the three remaining free places are immediately assaulted by a fine trio: husband and wife, both rather young, with her mother in tow.

Problem: none of the three weighs less than a ton, and each of them is laboriously dragging a suitcase that, given the size, contains in all probability a corpse, or a BMW assembly kit.
Excuse me here, excuse me there, a crushed foot, a head down at the last moment to dodge the edge of one of the suitcases, that are somehow hoisted up on to the luggage rack. Finally, the three squeeze their big backsides into the tight space of the seats, place their elbows on the armrests, colonizing them, and start fanning themselves, all breathless and sweaty.
The guy in the jeans, now sitting between the two large women, looks like a slice of cheese between two half loaves of Puglia bread. In contrast, he feels as though he’s shrunk.
A thousand watts of power chat: everyone – including the travellers in neighbouring compartments and those standing in the corridor – have to be told where the trio is headed, why they are travelling, how hot it is outside, and how kind uncle Antonio was to have driven them to the station, otherwise they would have missed the train.
Stay calm. Got to stay calm and keep cool: the riff from Luca Dirisio’s song runs round obsessively in the mind of the cheese-slice guy.  It’s fair to point out that like any properly shy guy, he is not disposed to striking up casual acquaintances and, like any proper grumpy old bear, it is absolutely against his nature to chat for chatting’s sake, as a way of passing the time. If there is nothing interesting to say, then let there be silence. This guy loves silence. Silence is the perfect condition for enjoying the things he likes the most: reading, writing, and one other thing which, to be honest, from a certain point onwards, should not take place in absolute silence, or it means isn’t coming on so well. But that is another matter.