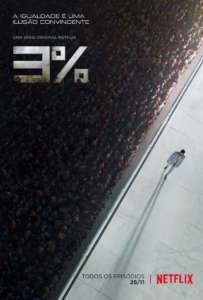 The world is divided into two sides/parts: one is abundant/wealthy, the other one is scarce/poor, and a selection process occurs between them. Each person, who’s already twenty years old, just has  one chance.
The chosen ones never return: they are part of the 3%.
This is the introduction to the 3% universe, a Brazilian dystopian tv series released by Netflix in 2016.

The tv series presents a nameless Brazilian  city as a restricted universe that is divided into two areas: on one side the poor Inland; and on the other side the wealthy Offshore. However, the first season takes place only in the Inland, that is shown as a huge favela without electricity or  technology, where people live in poverty, dirt, disease and violence.
In stark contrast, there is the Offshore that has never been presented to the spectator and that can only be imagined or dreamed of by the inhabitants of the Inland. The Offshore is a paradise that provides any  everything the others  lack: abundance of food, health and advanced technology; however, it’s located in the ocean and therefore reachable only after passing the Process.

It’s not surprising that the first season is focused on this Selection and on its tests designated to prove who’s worthy  of accessing the Offshore, the 3%. in the year of the one hundred fourth Process, five young people, episode after episode, test after test, fight with all their strength , together with the other 20-year-olds to overcome this only obstacle that separates them from their goals. Marco, Joana, Fernando, Michele and Rafael are all moved by the same desire to pass the Process, but each of them has a different motivation: reuniting with the family, running away from a dangerous situation, the hope to get back on their feet  again and revenge.
However, things turn out to be different from their expectations. The Process is far from being a fair and meritocratic evaluation and, paradoxically, in a selection that should distinguish between deserving and not deserving, the borders between wrong and right become blurred until they vanish. In this competition, the participants  are allowed to cheat, and the tests are thought to bring out their worst, often with deadly results. However, even the perfection of the Offshore is nothing but a facade, revealed in the second season, when this place is finally introduced to the viewer along with its dirty little secrets. Hidden truths emerge about its origin: the intention of a group of scientists was to create a perfect world, efficient and eco-friendly; but this utopian project of a technological society turned out to be an elitist dictatorship, that  was  built on the grounds of  injustice –  “We are here in order to create a perfect world, that by definition can’t be for everyone, because the average human is rotten. Things work here thanks to our Selection.”

In our time, when so much is said about corruption, dishonesty and nepotism, this TV series presents the danger of a world entirely ruled by meritocracy at its highest level, that ends up being  a dictatorship at its  best. An elite society that managed to justify, on the basis of the merit, an extremely unfair division between those who have everything and those who have nothing by using the Process to control the population. In fact, the Inland accepts this situation passively because everyone strongly believes in the Process and in its fairness; while the elite control them with the hope that the Process is the only way of escaping  from wretchedness. Our protagonists will find out that they have to rebel against this subjugation system in order to really be free.

Translation by Chiara Elli, edited by Elena Sofia Rizzi and Sofia Ronchis; final edition by Jenovia Amisti Smith.
Elena Sofia Rizzi and Sofia Ronchis are students of the Linguistic Sciences and Foreign Letters faculty at the Catholic University of the Sacred Heart in Brescia, Italy; they collaborate with Inkroci in the translation project coordinated by Professor Jenovia Amisti Smith.

Seumas OKelly
Mary had spent many days gathering wool from the whins on the headland. They were the bits of wool shed by the sheep before...

Michele Curatolo
Alberto is working in Milan now. Ever since he had started living with Carla, and needed some money to get along, for a long time...

Heiko H. Caimi
Choosing  to tell the world of labor, the real one, live, experienced day after day by people who do or suffer it- in ten...

Nidhin VN
Each and every one of Gopikrishnan's paintings is deeply engraved in the minds of the audience. The beauty of the art is due to ...