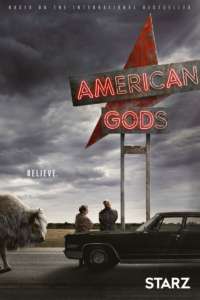 American Gods is a 2017 tv series, an adaptation of Neil Gaiman’s novel of the same name.

Shadow Moon, the main character, is a man who has lost everything.  He has just been released from prison, has no job and his wife, who died in a car accident, was cheating on him with his best friend.  So when the mysterious Mr. Wednesday offers him a job as his bodyguard, Shadow accepts it but not expecting that he would be involved in something much bigger:  a war between Gods.

The entire first season is built around this event and it is a long introduction to the titanic conflict and to the characters and it puts the different forces in place.  On one side the Ancient Gods, led by Mr. Wednesday and on the other side the new idols of modernity, anointed as the new Gods and to whom one has to offer attention, time and life.  The God of Globalisation Mr. World, the Technical Boy and the Goddess of Media will try to counter Wednesday and Shadow on their travels through America to recruit allies and take back the respect and the supremacy they had over humans.

The real journey is Shadow’s inner journey, the journey of his beliefs and certainties, which leads him to question everything he believes in.  The sequence of hallucinated visions, surrealistic scenes and flashbacks of the arrival of the Ancient Gods in the New World convince both Shadow and the viewer to accept that reality goes beyond what you see, that another underlying and hidden world exists:  the Gods have taken human shape and have had to compromise with modernity, to come to alternative methods of adoration and to use technology in order to receive again the adoration which once was traditionally due to them.

It is human kind, with their beliefs and values, that empowers the Gods and shapes reality. The analysis of the relationship between perception and reality undermines the rational assumption ‘That’s how the world works: it’s either real or it’s fantasy.’[1]: it is this certainty – one of his last after losing faith in love, friendship and life –  that Shadow must leave behind in order to find himself again and give meaning to his existence.

The series is also a clear representation of the current consumer society and the new digital age ruled by technology,  that has brought improvements and technical innovations but also isolation and apathy. In a world where devotion has been replaced by addiction, the real and concrete war between the Ancient and the New Gods is the metaphor of another more important conflict, even if it is only a metaphorical one: modernity looms over the world and separates humans from one another, takes them away from their traditions, ancient habits, culture and especially from their faith, without which the Ancient Gods will perish, weak and forgotten. It is a struggle between a mythological past and a technological future, entirely played in a changing present, with a frenzy that threatens to devour the lives of humans, without them realising it.

All we can do is wait for the second season to see who will came out as the winner.