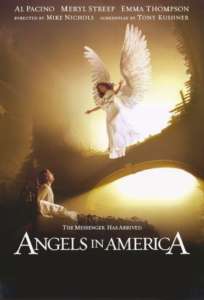 Angels in America is the TV adaptation of Tony Kushner’s play Angels in America – A Gay Fantasia on National Themes, whose division in two parts, Millennium  Approaches and Perestroika, three chapter each, has been maintained in the transposition on the small screen, entirely directed by Mike Nichols.

In 1985 their daily life is disrupted by some important changes that, if on the one hand mark an end, on the other are the beginning of something new, that leads the protagonists to cross their paths: in Part One the rise of the homosexuality, long suppressed by Joe, decrees the end of his marriage to Harper, just like Prior’s revelation to his partner of having AIDS leads to a breakup with Louis, who, unable to deal with the situation, prefers to run away and abandons him, starting a relationship with Joe soon after meeting him; meanwhile Roy receives the same diagnosis as Prior and, despite the denial of his disease, he is admitted to the hospital in critical condition.

The Part Two is literally the reconstruction of the lives destroyed in Part One, which is not a return to the start but an evolution: Prior is visited by the angel of America, who assigns him the mission to convince mankind to stop migrating and moving, because it is the only way to get God, who abandoned them, back. At the beginning, Prior seems to accept the mission, tempted by the idea of immobilizing the evolution, the shift and therefore his pain and illness, but after a confrontation with Joe’s mother he refuses his task and understands that progress is not just inevitable, but it is also a distinctive mark of mankind, together with a strong attachment to life, despite the suffering. To confirm this, the only character to succumb is the one who never shows an evolution, remaining the same till the end: Roy, with his death, shows how eventually the losers are the one who refuse change, staying stubbornly anchored on their own positions. On the contrary, all the other characters embrace the changed living conditions and make progress: Harper breaks up once and for all with Joe, who now lives his homosexuality out in the open, and even Prior decides not to get back together with a penitent Louis, who has finally accepted the conditions of his partner, while Hannah finds new friends in the homosexual people she was afraid of.

Through the narration of stories, so different and yet so similar, starts a consideration of the relation that the individual has with the society, highlighting lights and shadows. Here we are talking about the American society of the end of the century, bigoted and conservative, based on appearance: not all the characters manage to live their homosexuality peacefully, and they hide or deny their own identity for what they think the society demands from them as individuals. Besides Joe, who represses himself because of the expectations his parents and all the mormon community where he grew up have, another emblematic character of this connection between a person and the system is Roy: he denies his homosexuality from the beginning to the end, but not in his meaning of men who sleep with other men[1], but in the meaning given by the society, which is a weak and marginalized social class without power; and Roy, a great and powerful lawyer, can’t and don’t want to be considered like that. Consequently, he tries to adapt himself to the dominant identity, but in Angels in America the identities are the product of transformations, mixtures and differences, that are the distinctive marks of the American people.

In the final analysis, this is not just a series about the marginalization of gay, their difficult condition or AIDS, but an anthem to the democratic America, multicultural and multiethnic, which is built on the hope of change. The final scene infect gets back to the concepts of change and progress: five years have passed and Prior, still alive thanks to the experimental drugs Roy have left after his death, is discussing with Louis, Belize and Hannah about the great transformations of those years, like the fall of the Berlin Wall and the end of cold war, to demonstrate that the world moves in one direction: forward and, even if many have died of AIDS, we move on with the survivors and we don’t hide anymore[2].

Meaningful is the line that closes the last scene, that summarizes and contains the entire message of the series: Where do we go? We just go, the important is going on.