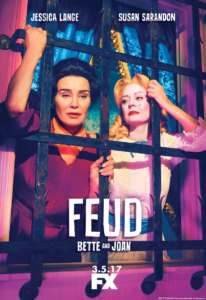 The first season of Feud was transmitted between March and April 2017. It has 8 episodes and it is based on the true story of the rivalry between the legendary actresses Joan Crawford and Bette Davis, respectively played by Jessica Lange and Susan Sarandon. The story takes place mainly during the shooting of the 1962 film What ever happened to Baby Jane?, the main stage of their conflicts.
Although the rhythm of the narrative is quite slow, the season as a whole is never boring. The introspective reflection of the two actresses takes up quite a large space. Thanks to this, we can clearly understand the point of view of both actresses, since what they think is made explicit and we can also observe small parts of their personal life. In doing so we can empathize with both of them.

On the one side we have Joan Crawford, who is considered one of the most beautiful women on the Hollywood scene. She fights against the passing of time, that leaves visible marks on her body. On the other side there is Bette Davis, who has always been recognized for her talent, but she has struggled a lot to find interesting roles to play. Both used to being the main characters; in this case they have to share the stage and they are both determined not to spotlight the rival.
You mean all this time we could have been friends? This is the title of the last episode, and it refers to a sentence that is pronounced in the movie What happened to Baby Jane?

Apart from the context of the film, the series suggests that the two actresses, many years after the end of shooting, will realize that they are much more similar than they thought at the time: even if in a different way, both had to cope with the advancing age. They worked in a sector that has always promoted an unachievable stereotype of beauty.
They had met in a period when they saw their roles performed by young rising stars, and both were facing very difficult family situations and personal crises. In addition to this, on that occasion each of them had to work with a world-famous actress they feared and admired.
Could we imagine how things would be if they had understood from the beginning how deeply similar they were?

The series is very interesting, because it gives us the chance to get know two pillars of the world of cinema in an intimate and sensitive way. It is introspective and leads us to empathize with both, without suggesting a preference between the two divas.
In this case the slow rhythm is an added value, because the time dilation offers space for reflection. Everything is made perfect by the excellent acting of actors such as Jessica Lange, Susan Sarandon and Stanley Tucci.

Translation by Alessandra Franconi and Francesca Sabbadini, edited by Jenovia Amisti Smith
Alessandra Franconi and Francesca Sabbadini are students of the Linguistic Sciences and Foreign Letters faculty at the Catholic University of the Sacred Heart in Brescia, Italy; they collaborate with Inkroci in the translation project coordinated by Professor Jenovia Amisti Smith.