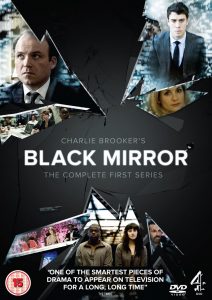 Black Mirror is a tv series created by Charlie Brooker, the first two seasons broadcasted by Channel 4 from 2011 to 2014.[1]

Each episode is self-contained, yet linked to the others with the same concept, the distressing evolution of the relationship between technology and humankind.

I decided to consider in this case Fifteen Million Merits[2], the second episode of the first season, because after years from the original broadcasting it keeps popping up in my thoughts with an element of concern, regarding the extensive succession of characteristics from the Information and Communication Technologies society.

This episode is interesting as it shows a closed system which represents, in a metaphorical way, some traits of the modern era. This means: in order to gain money (or ‘merits’) to buy food, apps, toothpaste, the right to skip an ad etc, every day the characters show up at their workstation, jump on the exercise bikes and start pedaling. They can chat with each other but they usually don’t, more often focused on the screen in front of them where there are many channels to choose from; from video games and the talent show ‘Hot Shot’ (that the protagonists will take part in), to the virtual shops etc.

When they finish ‘work’ (and it is important to remark that their job in this closed system is totally useless, its only purpose being the gain of money in order to maintain the system itself) the characters go back to their cubicles with a bed, a bathroom and most importantly the screens that cover all the walls. Here they can resume the virtual entertainment activities that they were watching on the bicycles.

The slaves of developed industrial civilization are sublimated slaves, but they are slaves, for slavery is determined ‘neither by obedience nor by hardness of labor but by the status of being a mere instrument, and the reduction of man to the state of a thing.’

In the case of Fifteen Million Merits this theme is merged with technological dystopia, this way the human body is reduced as a mean to access the virtual reality. The real world is colourless; likewise their clothes all uniform and grey. Customization, for the simple individuals that work at the bike, only happens in the virtual reality where they can build their own character, (‘avatar’).

Just to make the parallelism explicit, I’d like to open a parenthesis on the silent acceptance of the commercials on tv, radio, internet. Is it my duty to watch/listen to commercials? Is it disrespectful to skip them installing a specific software, for example?

At the moment, on the internet at least, the ads are justified by the fact that services like Youtube or Spotify are free. This episode of Black Mirror proposes an aberration, a future or parallel world where commercials are integral part of people’s lives and where it is necessary to have a substantial bank account in order to afford to live without them.

If Black Mirror puts forward the possibility of a black and white world, with a little abstraction it also enables the chance to imagine the opposite scenario: how would the world be without advertisement? And to open some perspective on needs and desire: would we buy the same things? Would we watch the same shows? Would we read the same books?

“False” are those [needs] which are superimposed upon the individual by particular social interests in his repression […] The result then is euphoria in unhappiness. Most of the prevailing needs to relax, to have fun, to behave and consume in accordance with the advertisements, to love and hate what others love and hate, belong to this category of false needs.

Bing doesn’t have any particular interests, it seems in fact that he lives in a condition of apathy until he hears Abi singing in the office’s bathroom. He proposes that she participates in the talent show ‘Hot Shot’ and claims he will buy her an expensive ticket using all his savings.

One of those who managed to have success through Hot Shot reveals in a tv show:

Best thing about my new lifestyle? Um, where do I start? I love choosing my own clothes and I love gold. I feel like it really expresses who I really am.[3]

Compared to this kind of inauthenticity, Abi’s character is genuine and it is this characteristic that attracts Bing. The song that she sings she learnt from her mother, who learnt it from her mother. Abi uses the lunch wrappings to make origami, and she represents an opening towards authenticity.

He loses control, throws himself against the walls and breaks a screen. He then finds on the floor a scrap of glass, which gives him a reason to go forth in a plan to become famous and expose the system, but in the end dooms his attempt to pierce the system.

He starts to pedal savagely and save to the last cent. When he reaches the 15 million merits he buys a ticket to take part in Hot Shot. He arrives as an automaton, with the scrap of glass that he will point to his own throat during the performance. When he arrives on the stage he introduces himself as ‘some kind of performer’ and this is his speech:

I haven’t got a speech. I didn’t plan words. I didn’t even try to… I just knew I had to get here, to stand here, and I wanted you to listen.

To really listen, not just pull a face like you’re listening, like you do the rest of the time. A face that you’re feeling instead of processing. You pull a face, and poke it towards the stage, and we lah-di-dah, we sing and dance and tumble around. And all you see up here, it’s not people, you don’t see people up here, it’s all fodder.

And the faker the fodder, the more you love it, because fake fodder’s the only thing that works any more. It’s all that we can stomach.

Actually, not quite all. Real pain, real viciousness, that, we can take. Yeah, stick a fat man up a pole. We laugh ourselves feral, because we’ve earned the right, we’ve done cell time and he’s slacking, the scum, so ha-ha-ha at him! Because we’re so out of our minds with desperation, we don’t know any better. All we know is fake fodder and buying shit.

That’s how we speak to each other, how we express ourselves, is buying shit. What, I have a dream? The peak of our dreams is a new app for our Dopple, it doesn’t exist! It’s not even there! We buy shit that’s not even there.

Show us something real and free and beautiful. You couldn’t. Yeah? It’d break us. We’re too numb for it. I might as well choke. It’s only so much wonder we can bear.

When you find any wonder whatsoever, you dole it out in meagre portions. Only then until it’s augmented, packaged, and pumped through 10,000 preassigned filters till it’s nothing more than a meaningless series of lights, while we ride day in day out, going where? Powering what? All tiny cells and tiny screens and bigger cells and bigger screens and fuck you!

Fuck you, that’s what it boils down to. Fuck you for sitting there and slowly making things worse. Fuck you and your spotlight and your sanctimonious faces.

Fuck you all for thinking the one thing I came close to never meant anything. For oozing around it and crushing it into a bone, into a joke. One more ugly joke in a kingdom of millions. Fuck you for happening. Fuck you for me, for us, for everyone. Fuck you![4]

Bing created the need for rebellion and the system immediately satisfies it, assigning him a TV show to scream his invectives. His ex colleagues watch him now sometimes, on their screens while they ride their bikes.

A good science-fictional dystopia is an alarm bell, it says: maybe we’re not there yet, but we could get there sooner than you think.

This episode of Black Mirror particularly hit me because it shows many real characteristics of the modern western society. The obsessive consumption, the gradual decline of the real contact with other human beings, life being increasingly filled with social networks, and the ever present advertising are real elements of everyday life.

Science fiction can bring out the possible degeneration of the real problems. Then it’s for the egregious audience to act accordingly.

[1]      The third season will be broadcasted by Netflix.