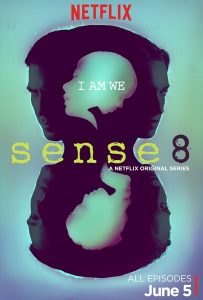 Sense8 is a tv series by the Wachowski sisters, broadcasted by Netflix on the 5th of June 2015. The story follows eight characters, strangers in the beginning, in eight different cities:

1. Will (Chicago, police officer, haunted by a recurring nightmare, who strives to be worthy of his father);
2. Capheus (Nairobi, shantytown driver with a solar character, Jean-Claude Van Damme fan);
3. Sun (Seoul, daughter of a successful businessman with whom she has a difficult relationship, she is a martial art champion);
4. Nomi (San Francisco, transsexual woman, blogger, hacker and activist);
5. Kala (Mumbai, educated and religious woman, about to merry a man she doesn’t love);
6. Riley (London, DJ, born in Iceland, she left following a terrible premonition);
7. Wolfgang (Berlin, burglar, dealing with a mafia family his father was linked to);
8. Lito (Mexico City, gay actor, but sex symbol of the heterosexual world).

The first element that unites the eight characters is the death/sacrifice of Angel, who was part of the previous generation of sensates. Angel appears to them in the form of a vision before killing herself in order not to be captured by the corporation that hunts the sensates.
From this moment on the protagonists start to develop connections: when they are in need they can talk to each other through continents, share abilities or knowledge, act one for the other. But not only this, their union follows the thin bond of emotions and sensations. This way they can, for example, find themselves humming What’s up by the 4 Non Blondes when only Riley is listening to the actual song on her Ipod.

“I’m here” is the first line of the first episode and determines the focal point of the series: we are not alone. The sensates perceive each other’s emotions; they share joy, pain, anxiety, enthusiasm, urgency. They live other’s emotions like their own and from here, the invitation to tolerance of the series is set off. Tolerance which goes two ways:
– The invitation to tolerance of a new emphatic line of the human evolution, the sensates, that on the contrary are hunted;
– The tolerance towards the differences that we meet every day in our non science-fictional world, people of different gender, sexual orientation and identity, different ethnicities and social classes, different languages and religions.

David Foster Wallace, in the commencement speech at Kenyon College in 2005, states1:

[…] Everything in my own immediate experience supports my deep belief that I am the absolute centre of the universe; the realest, most vivid and important person in existence. […] Think about it: there is no experience you have had that you are not the absolute centre of. […] Other people’s thoughts and feelings have to be communicated to you somehow, but your own are so immediate, urgent, real.

This is precisely the assumption that Sense8 overturns asking the question: what would happen if the human species started to present cases of telepathy/empathy/sharing of the senses?
Of course in the real world this hasn’t happened (yet), but the series and Foster Wallace seems to suggest the same solution, propose the same invitation:

[…] This is not a matter of virtue. It’s a matter of my choosing to do the work of somehow altering or getting free of my natural, hard-wired default setting which is to be deeply and literally self-centered and to see and interpret everything through this lens of self2.

Trying to put ourselves out of our own subjectivity, recognizing the subjectivity and centrality of others, accepting as a reality the fact that other people’s emotions are as vivid and important as our own: Sense8 offers to the viewer an interpretation of the science-fictional hypothesis that this opening to the other is a biological factor.

The issues the Wachowskis have chosen to address also seem to be a response to our increasing detachment and loneliness, despite our increasing technological connectivity3.

An elaboration of this concept is expressed by Nomi, who is participating to the Gay pride in San Francisco with her girlfriend Amanita, and declares:

This sentence represents the values of the series: tolerance and participation towards the different, transsexuality for example; empathy and union with other human beings, the sensates, as evolution that opposes the process of progressive individualization and departure from human connections. Sense8 is a science-fictional optimistic series, where the human species finds an antidote to solipsistic nightmares: the sensates.

In sci-fi speak, Sense8 is about transhumanism – the idea that in the future, as a species, we might become more than we are right now. […] Really, though, the point of Sense8 is to revel in the broadening of empathy – to fantasize about how in-tune with each other we could be. In its own, low-key way, therefore, Sense8 is a critique of sci-fi. It asks whether, in tying our dreams about human transformation to fantasies of technological development, we might be making an error. The show suggests another path to transcendence: each other5.

In my opinion this is the merit of the series: to put in the spotlight the possibility of a connection between different and distant people; to describe the diversity as a value; to suggest that collaboration and sharing win over individualism.
These values are brought forward in a tangle of plots linked to the single characters, in which the profound opposition between empathy and its absence is shown in Nomi’s mother, who prefers to deliver her to the corporation that is hunting her rather than accepting her transsexuality. These ideas are also reflected in Sun’s father and brother, who consider her as a woman incapable of managing the family business and in Lito himself, who is so afraid that his homosexuality will jeopardize his career that he risks in losing both a friend and his lover.
Empathy, acceptance and sharing collide with intolerance, discrimination and fear, but they win.

To conclude, skipping a few plot issues, the main critique that I feel like moving to Sense8 is: as the strength of the series is built over the characters and their interconnections, wasn’t it possible to make them more real, more honest? I am not referring to the fact that the sensates can appear as cultural stereotypes, even if sometimes it looks like it, but rather to their strenuous positivity.
The only ones to present a moral dilemma are Lito, who however plays a “romantic comedy” role, and Will, whose dilemma about Jonas (as Angel, a member of the previous generation of sensates) and his capture doesn’t seem to hold any consequences on the character’s psychology.
I would have liked to see the union of the sensates dealing with serious moral dilemmas instead of a positive and compact front against evil.
However, Sense8 provides a lot of interesting food for thought: trying to imagine the consequences on a large scale of a similar science-fictional evolution of the human species opens utopian settings in which intolerance and racism are fought by proximity and affection; it would only take one environmentalist in each group of sensates to make the planet a natural paradise.
Of course, being a science-fiction fan I wonder where is the cheat: if it was a setting by Gibson the sensates would soon find a way to destroy one another for power, assembling groups to enslave others. Maybe it would only take one racist individual in a group of eight to convince them all, instead of just a character of color to make them all tolerant.
Luckily, though, this is a story of the Wachowskis and we will find out in the second season which new evolution will it take.