Home Literatures Serial (identity) issues The man in the high castle: whatever the cost 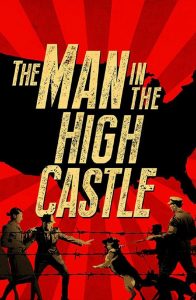 The man in the high castle is a novel by Philip Dick, first published in 1963, which after became a TV series created by Frank Spotnitz, produced by Amazon Studios. This article is about the TV series which in my opinion can be considered as some sort of fan fiction of the novel: catchy, exciting, modern and unfaithful to the core.

A brief context of the novel:

• The ‘Japanese Pacific States’ replace the western states, the ‘Greater Nazi Reich’ replaces the eastern states and the ‘Neutral Zone’, still free, is squeezed in the middle.
• Hitler is dying and it is expected that his potential successors (Goebbels, Göring) will not be as favorable about sharing the United States with the Japanese allies.

The setting is what most reflects Dick’s masterpiece: The Nazis won the war and they share the United States with the Japanese allies.

The images of the opening theme show an American flag, with the Nazi swastika instead of the stars. Visually, the setting is dark, dirty, and very Dickian. It transmits the feeling of claustrophobia and paranoia typical of the science fiction author, the terror of the establishment invading individual freedom, the force of an authority that goes insane and crushes the population, systematically destroying dissent, ideas, and the fertile foundation of opinion sharing.

Within this framework, what struck me about the novel is how the Japanese develop a maniacal trade of American antiques, mostly fake. Between the tawdry fakes, Frank starts to create new art in the form of jewelry (in the TV series this becomes a simple characterization of the protagonist, rather secondary).

This is also typical of Dick: the solution to anguish and therefore the exit from the vortex of paranoia resides in the hope of beauty, in the naive sweetness of a hug between strangers, and in the joy of simple hand work: small, almost insignificant, but authentic. Then, a crack opens in terror, and from it light starts to filter.

This elegance is lost in the TV series which substitutes it with a catchy (and more marketable) plot.

From the Nazi’s West: Blake asks the resistance’s leader to collaborate with him and he convinces him not to be a Nazi spy. As soon as Blake receives the mission to bring a truck (containing some illegal material) to the Neutral Zone, the resistance’s headquarters are attacked, almost everybody is killed or captured, yet Blake manages to escape with the truck, and heads towards the Neutral zone.

From the Japanese’s East: Juliana and Frank live under the Japanese occupation. She loves the eastern culture and martial arts and he hides his Jewish origins and refuses any kind of political involvement. Trudy, Juliana’s sister who is in contact with the resistance, leaves her a film to be brought to the Neutral Zone and gets killed by the secret services. The video shows a parallel world where Nazis and Japanese lost the war.

Blake and Juliana meet in the Neutral Zone, both looking for a contact of the resistance, both ignoring their respective roles.

Frank is kidnapped by the secret services who know about his origins, and that seek to find Juliana who is carrying the resistance’s film.
It is in a jail cell, through a crack in the wall that Frank meets Randall, the member of the resistance that had passed the film to Trudy (Juliana’s sister).
Through their conversation, I believe the focal point of the relation between individual and system (in this case an autocratic repressive Nazi system) is found, which opens a perspective of resistance that is rooted in the intimacy of personal choices, and in the possibility of loss.

Randall: Frank. Frank. Is that your name? Over here. It’s okay. I’m a friend. I gave that film to Trudy Walker.

Frank: Then you’re definitely not a friend. You got to tell them I have nothing to do with this.

Frank: Who the hell are you?

Randall: A man, just like you. A man who wants to breathe free.

Frank: Spare me the propaganda bullshit, all right? I meant your name.

Randall: It takes a lot of effort not to be free. Keeping your head down, holding your tongue.

Frank: I’m all for keeping my head down and my mouth shut, as long as I get to live.

Randall: There’s things worth more than your life, and you know it. You know where Trudy’s sister went. Don’t you?

Frank: What do you know about that?

Randall: The question is what do you know? Yeah, you know where she went. Why don’t you tell them?

Randall: Maybe. Why don’t you tell them and see what happens? If you can believe they’ll keep their word.

At this point of his detention Frank does not reveal where Julian is heading, instead sacrificing himself for her, not for an ideal of freedom, but for love. Frank also states that the Japanese would kill him anyway, even if he spoke. It is a brave choice and relatively simple to understand, many people could put themselves in his shoes.
Frank doesn’t yield to the pressure of the Japanese but is still skeptical towards the resistance and its possibilities to succeed. His motives are private and only influence and oppose the system accidentally.

Randall: Fuck! What are you doing? Frank! Even if you broke the chains, how do you think you’re going to get out of here?

Frank: Fuck! Was it worth it? All so you could pass on that stupid film of yours.

Randall: That film can change the world.

Frank: Yeah, it certainly changed mine.

Randall: Why do you think they torture us?

Frank: I got a feeling you’re going to tell me.

Randall: Because they know that that film shows the world not as it is but as it could be.

Frank: Yeah, well, in this world, they flattened D.C.with an A bomb. How do you people think a film is going to fight against that?

Frank: Yeah, you people. You dead-enders in the Resistance. How many are you anyway, huh? What, like seven, ten, 12? You really think you’re going to defeat the Japanese? The Nazis?

Frank: That’s not the way it looks from here!

After a while, something happens in Frank’s imprisonment and the situation changes completely. As the Japanese are aware of Frank’s Jewish origins, they also know about his sister’s and her children’s origins. Frank’s choice changes drastically: it is not about giving his life for the woman he loves, anymore. Now he is in the position of sacrificing his sister and her children to save Juliana, but this would be morally unacceptable. It is in that moment that Randall’s words and the ideals of rebellion gain weight and impose themselves in the precarious balance of Frank’s personal, individual and tragic resistance.

Randall: Tough choice, Frank. Either way, somebody you love dies.

Frank: Or maybe you all do.

Randall: They’re scared. Scared this film could bring this whole thing tumbling down. It doesn’t matter what you believe. Does it? Any more than it matters whether you think you’re a Jew. I wouldn’t blame you if you gave in. Most people would if it saved innocent lives. But torture, lies, blackmail? That’s how they stay in power.

Frank: Whatever I do, the Japs stay in power.

Randall: You’re wrong. You’re wrong. This ends only when people like us refuse to obey, no matter the cost. That’s the only way that we defeat these bastards! The only way you keep your soul. Don’t let them take your soul, Frank!

Here lies, in my opinion, the most interesting challenge proposed by this series. A challenge that Frank accepts and of which he pays the price. This type of choice, however, is not easy to understand, not intimately. In Frank’s shoes, personally, I don’t know what I would have done. I think it’s impossible to foresee one’s own behavior in such a situation and I believe that rationality, the frantic logical work of the mind which tries to consider possibilities and consequences (is it worth it for the kids, Jews, to grow up in a Nazi regime? Is it absolutely certain that the Japanese will kill them?) is not decisive.

It can be useful, though, maybe indispensable, to make an effort, trying to imagine one’s own individuality in a totalitarian regime and ask: on which side would I be? What would I be ready to sacrifice? But also: what do I judge unacceptable? How many sufferings can I see imposed to another human being before my conscience is moved? How many injustices can I tolerate to keep my life style, my love, the lives of my loved ones?
I am not trying to make judgments (of merit), I think that almost any answer can be at least justifiable, my point is: an answer better be there.

Translation by the Author (edited by Amy Scarlett Holt)

Elizabeth Willis
A witch can charm milk from an ax handle. A witch bewitches a man's shoe. A witch sleeps naked. "Witch ointment" on the back will allow you...

Emilia Mirazchiyska
Elizabeth Willis is the author of six collections of poetry, most recently Alive: New and Selected Poems, a finalist for the Pulitzer Prize. Other books...

Franco Buffoni
For three years here in Rome I’ve had a partner From Turkey, a Kurd. Communist, tortured in jail, He knows men and wolfs down life, when he...

Emilia Mirazchiyska
Franco Buffoni was born in Gallarate (Lombardy) in 1948. He is a full professor of literary criticism and comparative literature. For 30 years he...