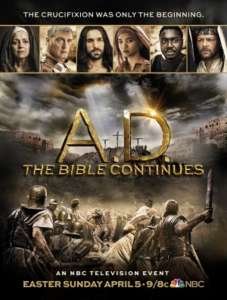 A.D. The Bile Continues is a 2015 American TV series based on the Acts of the Apostles and Epistles of Paul and tells about the main events after the crucifixion and resurrection of Jesus.

Besides the good acting and cinematography, this TV series (one season only) differs from other current period dramas for the impartiality of the authors – who try to tell the stories of the political and religious leaders of the time in an unbiased way – and for the absence of sensationalism or “strong scenes”. There are actually no sex scenes (as overused in Spartacus or even The Borgias), but above all,  violent scenes are never emphasized; it looks like the authors know just the right amount of “power” needed to pass the message.

Another asset of the TV series, as mentioned above, is the authors’ impartiality (as far as possible) in telling the story: we in fact see each part involved, each leader – Pontius Pilate and the Romans, Caiaphas and the priests of the temple, Peter and the apostles – addressing the situation in the way they believe is the best one, trying to take the right decisions to protect their world and according to their conscience. No character is, in fact, motiveless evil; they are all human beings, with their strengths and weaknesses, and they all have the same goal: to keep alive and safe what they believe in.

Obviously, the story is a bit romanticized, especially when it comes to the characters’ personal and family relationships, but all-in-all it is loyal to the scriptures and history. There are many moving scenes, as well as fascinating characters, like Saul of Tarsus (Paul), who aggressively persecutes the Nazarenes at first but, after Jesus appears to him on the road to Damascus, he finds true faith and starts spreading the word, with the same fire and passion he had before, only that now he’s guided by love; the actors playing Saul is actually very good at highlighting this difference.

Warmly recommended to everybody, believers or not, as it describes well our current social situation, where the unhealthy attachment to the old, the hate and judgment towards those who think and live life differently together with relativism and do-goodism, are confusing people and is therefore necessary to find an inner point of reference – an inner centre of gravity.