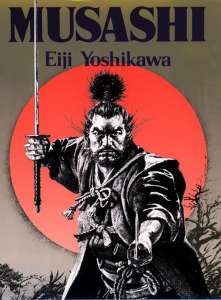 ‘I told you. I’ve just become a new man. I stayed in that musty hole for three years. I read books. I thought. I screamed and cried. Then suddenly the light dawned. I understood what it means to be human. I have a new name, Miyamoto Musashi. I want to dedicate myself to training and discipline. I want to spend every moment of every day working to improve myself. I know now how far I have to go. If you chose to bind your life to mine, you’d never be happy. There will be nothing but hardship, and it won’t get easier as it goes along. It’ll get more and more difficult.’

In this wonderful, international classic novel, we can live the life of one of the greatest warrior of all times and also find our true self.

The book tells the story of the samurai Miyamoto Musashi (1584–1645), the greatest Japanese warrior ever, starting from his first battle– that is the Battle of Sekigahara, in 1600 – up to the duel that made him famous in the whole world. A young knave called Takezo, Musashi’s given name, fights alongside his best friend Matahachi, and after the defeat he begins a solitary journey to undertake the Way of the Sword, that will lead him not only to a refinement of his fighting talent, but also to a deeper understanding of himself: to enlightenment.

In some parts of the novel describing the time political and social situation we can spot some similarity – more or less subtle – with the world’s current period, characterized by confusion, uncertainty, lies disguised as truths and captivity disguised as well-being.

Do not be alarmed by the book’s length, as the author’s beautiful storytelling makes this work a smooth and enthralling book, a true page-turner of the kind you never want it to end and that leaves a mark.

Instead of wanting to be like this or that, make yourself into a silent, immovable giant. That’s what the mountain is. Don’t waste your time trying to impress people. If you become the type of man people can respect, they’ll respect you, without your doing anything.