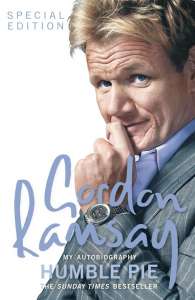 What’s behind this famous, starred, TV chef? What made him the man he’s today? Is he really the way he looks on TV?

Humble Pie, Gordon Ramsay’s autobiography, answers all these questions and shows us a child who had to grow too fast and, in order not to succumb, quickly developed the grit and determination of winners that helped him getting where he is today.

The chapters’ sections reflect Ramsay’s life stages, starting with his hard childhood. The Chef grew up in a crowded, poor and vagabond family, with an abusive and violent dad who used to drag them around the UK, not caring for them and even competing with his own children.

What mostly surfaces from these engaging pages (apart from Gordon’s “colorful” language) it’s how his tough childhood, rather than destroying him as it did with his little brother – who became a drug addict – made him driven and strong enough to survive, and excel, in the tough world of haute cuisine, where competition is unbelievable and often chefs are abused till the point of giving up.

One of the toughest trainings Gordon went through is definitely the experience with Marco Pierre White: “Marco was running a dictatorship: his word an is word alone, was all that mattered. He fancied himself as a kind of Mafioso, dark and brooding and fucking terrifying […] He would abuse you mentally and physically […] One minute, he was all smiles, ruffling your hair, practically pinching your cheek. The next he was throwing a pan across the kitchen. Often the pan would be full. Stock everywhere, or boiling water, or soup. But you wouldn’t say anything. You’d wait for the quiet after the storm, and then you’d clear up, no questions asked.“

The Gordon in this book fully opens up and shares some sensible issues from his career, such as the made-up stories of the British press (always hungry for gossip), false friends and big financial losses.

Particularly sweet are the pages about Gordon’s mother, wife and children that he clearly adores and show his big heart.

The first chapter about his dad is essential to make us deeply understand the rest of the book and put us in his shoes: Gordon’s need to resist his dad’s abuse, in order to avoid self-destruction, made him develop the kind of strength and resistance that helped him achieve his goals.

His determination, passion, and never-ending desire to improve are contagious, and are proof that it doesn’t matter where you come from, but where you decide to go: Gordon Ramsay chose to use a tough life to win and create a fulfilling and satisfying life, proving – like many other great  people – that everything is possible.

What would you choose?