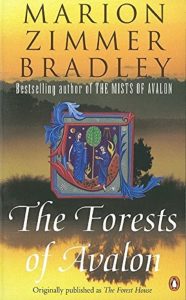 What’s behind the background of the legendary kingdom of Arthur, the once and future King, who’s always represented the kind of warrior and leader that everybody would want to run their government or company? What circumstances favoured the union between the old Pagan religion and Christianity?

The Forests of Avalon is not an essay or a history book but a novel that – despite a couple of gross mistakes – could be a quite realistic representation of Druidic life and the relationship between Romans and British people during the neo-Christian era.

Right in this era unfolds the fascinating story between Elian – a young woman from a Druidic family – and Gaius – son of the Roman prefect and a British woman who died while giving birth to her daughter.

The two meet when Gaius falls into a bear trap and Eilan’s family put him back to health, unaware of his Roman heritage as Gaius knows the local language quite well. Soon the two fall in love and he reveals Eilan his true identity, which she accepts despite her struggle between what she sees inside Gaius’s soul and the terrible stories that she’s learned about the Romans in her childhood.

Their families will oppose their relationship, so the two youngsters will have to part but will conceive a boy child during the Beltane celebration, where Eilan – now a priestess – serves the Goddess.

This encounter, clearly marked by their destiny (as Merlin’s appearance to Eilan reveals), will bring to the birth of Gawen, who one day will be destined to bring together the two opposed worlds represented by Romans and Britons and their relative religions.

Life must go on though so, while Eilan will be chosen as High Priestess of the Forest House – where all priestesses live and serve the Goddess – Gaius will marry a Roman girl who will never give him a son and that he will never be able to really love, but whose family will help him succeed in his career in the Roman army.

Many years will pass before the two can meet again; years of riots, sorrow, and experiences that will make them grow fast and force them to face themselves, their values and their destiny: Gaius will have to come to terms with an unstable Roman empire, risking to undermine his career and the wellbeing of his son Gawen, that Gaius would like to adopt to keep him safe; while Eilan will have to grin and bear it with her grandfather and Arch-Druid who will try to manipulate her influence as High Priestess and Goddess’s spokeswoman to make people acti according to his plans. Luckily, Eilan will have Caillean by her side, her much-loved priestess friend who will be her advisor. Caillean will also teach her how to handle coal with bare hands:

The fire can only harm you because you believe it is in the nature of fire to burn; once you know its true spiritual nature, you can handle it as you would a handful of dry leaves. Fire burns within you as it burns on the hearth. How can one flame harm another? Let the spark of life within you welcome fire!

The Forests of Avalon is a novel full of power and magic, taking the reader back in a time when qualities such as intuition and getting deeply in touch with oneself – qualities that luckily today are rediscovered and pursued – were natural and sponeaneous actions and attitudes.

Light the fireplace, grab a hot chocolate and get ready to dive into the magical Avalon.