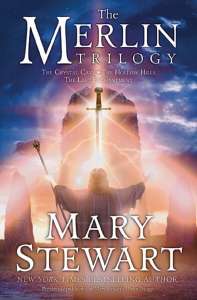 “My Lord, when you look for […] what I am looking for, you have to look in strange places. Men can never look at the sun, except downwards, at his reflection in things of earth. If he is reflected in a dirty puddle, he is still the sun. There is nowhere I will not look, to find him.”

The Crystal Cave
In this book, Myrddin Emrys, also known as Merlin, is still a child. As the bastard nephew of a British king and son of princess Niniane, he’s often mocked and alienated by others, even because rumour has it that he’s the devil’s son, since his mother never wanted to reveal his father’s true identity. From a very young age, Merlin starts “seeing things” and learns the laws of nature, how to use medicinal herbs and many other things from his teacher, Galapas. Despite his harmlessness and disregard to politics and power, he’s seen as a menace and forced to flee to save his own life. During his exile he will improve his magical arts and lay the seeds for the Arthurian legend. The first book of the trilogy ends with Arthur’s birth.

The Hollow Hills
In this second work, Merlin is now a respected and revered (even feared by some) wizard, and carries out his mission as the protector and “teacher” of King Arthur, that we come to know as a child and as a young king.

The Last Enchantment
The third and last volume of the trilogy is about Merlin’s old age and the kingdom of Arthur, now a man and a king, loved by his subjects and feared by his enemies. Merlin is always at his side and warns him against the traitors’ schemes, but at the same time he’s looking for a successor to pass his powers and knowledge to, so that after his death Arthur can be served and advised properly. We get better acquainted with Guinevere, Morgana and the knights of the round table, and we are touched by Merlin’s romantic love. The trilogy ends with the arrival at Camelot of Mordred, Arthur’s bastard son, who’s meant to destroy the great king.

Those who love King Arthur’s and the extraordinary wizard Merlin’s legend cannot miss this wonderful trilogy by Mary Stewart, maybe among  the best works on the Arthurian legend ever written. Originally published in the ’70s, the trilogy is a kind of “memoir” by Merlin, from his childhood to his old age, and it includes significant details not only about his life (private and public), but also about his family, including King Uther and Arthur. The author mainly based her work on the Historia regum Britanniae (The History of the Kings of Britain, ca. 1136 A.D.) by Geoffrey of Monmouth, who presented it as a historical work, although nowadays is considered a fake. However, Mary Stewart’s novels plot is extremely charming and you get a very strong feeling that “there is some true in it”. Having Merlin telling his story was a nice touch: it creates a great deal of empathy with him, discovering his human, intimate, and private side.

Usually, in our imagination, Merlin is this old and powerful wizard with a long beard who served the magnificent King Arthur (if only we had such rulers today!), but thanks to these works we get to know Merlin as a person, a child, a boy and a man, his dreams and talents, his relationship with others and life. Personally, I found extremely engaging the sections (which I think are the best parts of the books) that focus on his private life: in fact, we learn how he felt as the bastard child of princess Niniane and king Ambrosius; how he discover his powers and learned how to use them; his relationship with the God who gave him his powers, and his awareness of his mission; his sacrifice (in its true meaning of “doing the sacred”) of always putting himself after the service to the great king (first his father, then Uther, and finally Arthur); his unconditional love, and so on. Obviously, although Merlin is the protagonist of the trilogy, there are extensive references to Arthur, Guinevere, and all the other Arthurian characters we learned to know so well. These are timeless books that should be read not just to have a great adventure, but  also to rediscover (and practice in our daily life) values such as courage, dedication, loyalty, and service.