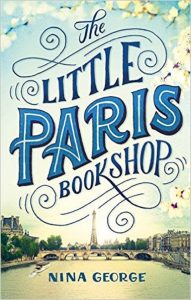 “[…] it was a common misconception that booksellers looked after books. They look after people.” One day, I felt an urge to buy The Little Paris Bookshop by Nina George, even if the book was already in my wish list.

It was the last copy on the counter, and I knew it had to be mine, that it was the right time to read it. I have so many books waiting to be read, and I never know which one will be the next one, but I learned that the right choice always comes in the right moment. It’s as if each book “knows” when we need it, that we need that story and that message in that specific moment of our life; and somehow, it stands out so we can pick it.
The Little Paris Bookshop tells the story of Jean Perdu, who owns a floating bookstore in a barge on the Seine– the Literary Apothecary–and has a special gift: he can always tell which book each client needs in that moment of his life (and it rarely is the book the client had the intention to buy).
To Jean Perdu, books are medicines for the soul.

Perdu used his ears, his eyes and his instincts. From a single conversation, he was able to discern what each soul lacked. To a certain degree, he could read from a body’s posture, its movements and its gestures, what was burdening or oppressing it. And finally, he had what his father had called transperception. ‘You can see and hear through most people’s camouflage. And behind it you see all the things they worry and dream about, and the things they lack.’

The bookseller’s life goes on as usual until Catherine, who’s been abandoned by her husband and left with nothing, moves into his building. Perdu’s gossiping and intrusive neighbours convince him to give Catherine a table, whose drawer contains THE letter that Manon, the love of his life, wrote him when she left him twenty years earlier. A letter he had always refused to read.
But Catherine, the first woman that, after twenty years of “isolation”, touches Perdu’s heart, somehow persuades him to read it, messing him up. The letter reveals Manon’s secret and the true reason behind her departure, turning the situation around and forcing Perdu to question his life choices.
All of a sudden, the librarian decides to jump on his floating bookshop and leave for the Provence, where Manon grew up, but what was supposed to be a solitary journey turns into his opportunity to open his heart again: he will share the boat with Max, a young writer in crisis who’s looking for inspiration; Vitale, an Italian man full of surprises; and Samy, a very peculiar woman.
Perdu’s empathy and his precious ability to help others make him, to me, a very nice character, a bookseller I’d constantly visit, despite sometimes his submissiveness and inability to look after himself, as if he endlessly wanted to punish himself, are irritating.
The dialogues between Perdu and his clients are hilarious, as the latter are often left speechless before Perdu’s frankness:

‘With all due respect, what you read is more important in the long term than the man you marry, ma chère Madame.’
She looked at him through eyes like slits.
‘Give me the book, take my money, and we can both pretend it’s a nice day.’
‘It is a nice day, and tomorrow is the start of summer, but you’re not going to get this book. Not from me. May I suggest a few others?’

The journey from Paris to the Provence is one of the best parts of the book, romantic, adventurous, a true initiation journey for the passengers of The Literary Apothecary.
Despite the encouraging preconditions and the lovely writing, some points lack spontaneity because of the author’s excessive attention to the vocabulary, creating a “flooded engine effect”, as well as the feeling that we’re being awakened during a nice dream. Another aspect that, to me, had a similar effect, it was the irregular structure of the dialogues that makes them confusing.
The virtues of this novel, however, exceed the flaws, giving us good food for thought about human nature, and affirming the great healing power of books.
At the end of the novel, there are also recipes from the Provence and a list of “medical” books.

Whenever Monsieur Perdu looked a book, he did not see it purely in terms of a story, retail price and an essential balm for the soul; he saw freedom on wings of paper.

Kästner was one reason I called my book barge the Literary Apothecary,” said Perdu. “I wanted to treat feelings that are not recognized as afflictions and are never diagnosed by doctors. All those little feelings and emotions no therapist is interested in, because they are apparently too minor and intangible. The feeling that washes over you when another summer nears its end. Or when you recognize that you haven’t got your whole life left to find out where you belong. Or the slight sense of grief when a friendship doesn’t develop as you thought, and you have to continue your search for a lifelong companion. Or those birthday morning blues. Nostalgia for the air of your childhood. Things like that.”

Gianfranco Caimi – Light in the shadow