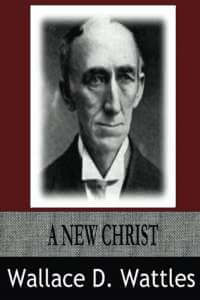 This times I’ve decided to talk about a great book, yet still widely unknown: A New Christ.
To those readers who may discard the book because it has “Christ” in the title, I want to make clear to you that this is neither a “religious” book or pamphlet, but it rather undermines the New Testament meanings as imposed by the Church – helping us reading them with our heart –  and it proves to be a useful guide through our life and contemporary society.
A New Christ was written in the early 1900 by Wallace D. Wattles, a mayor New Thought writer who’s mainly known for his works on leadership, personal and spiritual development, and for inspiring “The Secret” strand, with works such as The Science of Getting Rich.
Breaking the beliefs we’ve been brought up with, according to which Jesus is a kind of a poor wanderer who didn’t end up well, this book (and fortunately a few others too) shows the true New Testament meanings, breaking those false beliefs about Jesus and his teachings that have been trapping us for two-thousand years. For instance: Jesus was wealthy and upper class, and he preached abundance (which starts from within), faith (which means to follow the flow and trust that life happens for us and we always get what we deserve – this doesn’t mean that we have to let ourselves live, but rather take responsibility for our life and trust that all we need, it will be given); freedom and happiness.

As read in Wattles and the New Testament:

In the first place, then, Jesus could not have been despised because He was a carpenter, or the reputed son of a carpenter. […]And He was popularly supposed to be of royal blood, being saluted as the son of David.

As Jesus went on from there, two blind men followed him, calling out, “Have mercy on us, Son of David!” Matthew 9:27

Second, He could not have been despised for His ignorance, for He was a very learned man. Whenever He went into a synagogue He was selected to read the law and teach the congregation, as the one best qualified for that work.

Jesus returned to Galilee in the power of the Spirit, and news about him spread through the whole countryside. 15 He was teaching in their synagogues, and everyone praised him. (Luke 4:14-15).

Third, He was not despised for His poverty, for He had many wealthy and influential friends, and knew no lack of anything. Lazarus and his sisters, whose home was always open to Him, were people of consequence.

When the soldiers crucified Jesus, they took his clothes, dividing them into four shares, one for each of them, with the undergarment remaining. This garment was seamless, woven in one piece from top to bottom.  “Let’s not tear it,” they said to one another. “Let’s decide by lot who will get it.” (John 19:23-24).

A small but enlightening book, able to make us see the world as we know it from a different and more positive perspective.