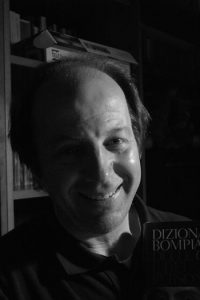 Another real Nowhere man floating down a Nowhere sea, he is hard to be defined both from his own features and from his age. He leads his life working unwillingly for one of the absolute temples of Brescianity, from which he nevertheless takes inspiration for his own writings. Expelled from every circle he joined, his friends call him Wikipedia because of his mysterious opinions and unclear pronunciation of Rs, Ls, Vs, Ps, Ss, and Fs, which he mingles in the same sound. He claims to be a pacifist, but also boasts that, a long time ago, he wrote some revolutionary texts for a bad-tempered, greedy former guerrilla hero, now converted to the cause of the free market.