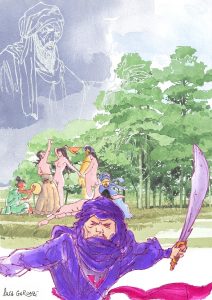 CONCERNING THE OLD MAN OF THE MOUNTAIN.

Mulehet is a country in which the Old Man of the Mountain dwelt in former days; and the name means “_Place of the Aram_.” I will tell you his whole
history as related by Messer Marco Polo, who heard it from several natives of that region.

The Old Man was called in their language ALOADIN. He had caused a certain valley between two mountains to be enclosed, and had turned it into a garden, the largest and most beautiful that ever was seen, filled with every variety of fruit. In it were erected pavilions and palaces the most elegant that can be imagined, all covered with gilding and exquisite painting. And there were runnels too, flowing freely with wine and milk and honey and water; and numbers of ladies and of the most beautiful damsels in the world, who could play on all manner of instruments, and sung most sweetly, and danced in a manner that it was charming to behold.
For the Old Man desired to make his people believe that this was actually Paradise. So he had fashioned it after the description that Mahommet gave of his Paradise, to wit, that it should be a beautiful garden running with conduits of wine and milk and honey and water, and full of lovely women for the delectation of all its inmates. And sure enough the Saracens of those parts believed that it _was_ Paradise!

Now no man was allowed to enter the Garden save those whom he intended to be his ASHISHIN. There was a Fortress at the entrance to the Garden, strong enough to resist all the world, and there was no other way to get in. He kept at his Court a number of the youths of the country, from 12 to 20 years of age, such as had a taste for soldiering, and to these he used to tell tales about Paradise, just as Mahommet had been wont to do, and they believed in him just as the Saracens believe in Mahommet. Then he would introduce them into his garden, some four, or six, or ten at a time, having first made them drink a certain potion which cast them into a deep sleep, and then causing them to be lifted and carried in. So when they awoke, they found themselves in the Garden.

CHAPTER XXIV.
HOW THE OLD MAN USED TO TRAIN HIS ASSASSINS.

When therefore they awoke, and found themselves in a place so charming,
they deemed that it was Paradise in very truth. And the ladies and damsels dallied with them to their hearts’ content, so that they had what young men would have; and with their own good will they never would have quitted the place.

Now this Prince whom we call the Old One kept his Court in grand and noble style, and made those simple hill-folks about him believe firmly that he was a great Prophet. And when he wanted one of his _Ashishin_ to send on any mission, he would cause that potion whereof I spoke to be given to one of the youths in the garden, and then had him carried into his Palace. So when the young man awoke, he found himself in the Castle, and no longer in that Paradise; whereat he was not over well pleased. He was then conducted to the Old Man’s presence, and bowed before him with great veneration as believing himself to be in the presence of a true Prophet. The Prince would then ask whence he came, and he would reply that he came from Paradise! and that it was exactly such as Mahommet had described it in the Law. This of course gave the others who stood by, and who had not been admitted, the greatest desire to enter therein.

So when the Old Man would have any Prince slain, he would say to such a youth: “Go thou and slay So and So; and when thou returnest my Angels shall bear thee into Paradise. And shouldst thou die, natheless even so will I send my Angels to carry thee back into Paradise.” So he caused them to believe; and thus there was no order of his that they would not affront any peril to execute, for the great desire they had to get back into that Paradise of his. And in this manner the Old One got his people to murder any one whom he desired to get rid of. Thus, too, the great dread that he inspired all Princes withal, made them become his tributaries in order that he might abide at peace and amity with them.
I should also tell you that the Old Man had certain others under him, who copied his proceedings and acted exactly in the same manner. One of these
was sent into the territory of Damascus, and the other into Curdistan.

CHAPTER XXV.
HOW THE OLD MAN CAME BY HIS END.

Now it came to pass, in the year of Christ’s Incarnation, 1252, that Alaü, Lord of the Tartars of the Levant, heard tell of these great crimes of the Old Man, and resolved to make an end of him. So he took and sent one of his Barons with a great Army to that Castle, and they besieged it for three years, but they could not take it, so strong was it. And indeed if they had had food within it never would have been taken. But after bei ng besieged those three years they ran short of victual, and were taken. The Old Man was put to death with all his men [and the Castle with its Garden of Paradise was levelled with the ground]. And since that time he has had no successor; and there was an end to all his villainies.
Now let us go back to our journey.

The Travels of Marco Polo
by Anna Ettore

The Travels of Marco Polo, which is the story of Marco Polo’s long journey in Asia, can be considered a geographical encyclopedia of the time he lived, since it brings together the fundamental knowledge about Asia at the end of the thirteenth century in one book.
As well as a narrative of his journey, it is also a historical and geographical treaty, for it describes locations and populations, nature and science, as well as the historical and political events concerning the visited areas, thus providing a valuable tool to sketch, in a more or less reliable and controversial way, medieval Asia.

The first editor was Rustichello da Pisa, an Italian writer contemporary to Marco Polo, who had learned the French language in Pisa, traveled to Europe and to the Holy Land, also writing a prose compilation of pre-existing Arthurian novels.

Rustichello was taken prisoner in Genoa after one of the battles among the maritime republics, and met Marco Polo in prison: he had also been taken prisoner around 1298, after a Venetian defeat.
During his imprisonment in the Palazzo San Giorgio jail in Genoa, Marco Polo told Rustichello the memories from his voyage, and Rustichello transcribed everything in ‘langue d’oil’, a lingua franca of crusaders and merchants, in his Divisament du monde (“The description of the world”), known under the title of Il Milione – TheTravels of Marco Polo.

Marco Polo was born in Venice in 1254. He had an intense and adventurous life and was a great explorer. He was born into a family of the Venetian aristocracy merchants: his father and uncle, from whom he learned the merchant activities, had already crossed Asia before him, reaching Beijing. On the way back to Italy, with a mission entrusted to them by the Great Khan of the Mongols for the Pope, they returned to Venice, and in 1271 the young Marco, a teenager, went along with them.
They crossed the Middle East and Persia, Central Asia and the Gobi Desert, and finally arrived in China and Khanbaliq – the ancient Beijing – after more than three years of travelling.
At the court of Kublai Khan, Marco was welcome and received all honor, becoming over time even the Khan’s adviser and ambassador.
He returned to Venice in 1295, 24 years from his departure, at a time when Venice was at war with the Republic of Genoa; he participated in the war and was taken prisoner.

A great scholarly debate has developed around Marco Polo’s life and work, as many sceptics have questioned the veracity of his exploration itineraries.
Perhaps originated from the idea of setting up a travel and business guide for the merchants, The Travels of Marco Polo made Asia known to Europeans, because although Marco Polo was not the first Westerner to reach China, as evidenced by his own family history, he was the first to leave such a detailed story of the places he visited and his experiences not only did his book influence the explorers who followed, but also the science of cartography.