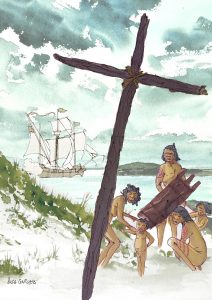 Antonio Pigafetta was a key player of one of the most amazing world exploration trips.He was born in Vicenza in 1492, and he was an Italian seafarer and geographer.

The relevance of his own venture, fundamentally lies in the fact that he took part to the first globe circumnavigation, between 1519 and 1522, and he was able to accomplish it after the murder of Ferdinand Magellan, leaving a detailed description of the journey in the Report of the first trip around the world, a lost manuscript that was rescued later, in 1797, and today is considered one of the most important documentary evidence relating the geographical discoveries of the Sixteenth Century.

Antonio Pigafetta, fascinating and fleeing personality, for scholars he still represents a partial mystery. About him too little is known to define a satisfactory profile on the biographical side. Documents and the testimony of contemporaneous are scarces, and his own character primarily appears from what he wrote in his own report.

His own narration about the first world circumnavigation was one of the greatest achievements in the history of navy exploration and discovery.
In this narration can be found descriptions of peoples, countries, goods and even the languages that were spoken, of which the seafarer was trying to assemble some brief glossaries.

Pigafetta tells how, being in Barcelona in 1519, he heard about Magellan’s expedition, and being wishful to learn about the world, he asked for and obtained the permission to join in the voyage.

Magellan’s fleet weighed anchor from Seville on August 10th of the same year with five smaller vessels, heading towards Canary Islands and down along the African coast, and across the Equator. From there they sailed towards Brazil coast , where they stayed for some time, making supplies and weaving friendly contacts with the cannibalistic natives who dwelled there.

Moving on, then they arrived in Patagonia, where they spent winter months in a desolate solitude. They met local people, who looked like giants in their eyes full of wonder, because of their robust body types.

They survived the mutiny of one of the captains and some disgruntled sailors, and continued the exploration of the coast. One of the vessels was drowned, but the whole crew managed to be saved.

They proceeded until the discovery of the strait, named after, Magellan himself, on October 21st 1520, and went through, although one of the ships deserted, sailing back to Spain.
Finally, they arrived in the Philippines, where they became acquainted with the natives who proved hospitable and welcomed them as guests in the king’s palace. The indigenous people, affected by the celebration of Mass and the crucifix planted in the island, promised to convert to Christianity.

Quickly they developed commerce and trade, and the king, the queen and other notables of Cebu were converted, until the entire population rapidly followed them in the new religion.
Shortly after, happened the disastrous episode that changed the course of the expedition. Magellan took part in a conflict between some local tribes and was killed. The rest of the expedition managed to escape and retired, preparing to leave, but a trap set by Magellan’s interpreter and the king of Cebu, led to another massacre of the Europeans.

The surviving ships continued toward Borneo and to the city of Brunei, where they managed to stock up, then from there, traveling southbound, they came to the Moluccas, 27 months after the departure from Spain, finding a warm welcome by an astrologer king who had predicted their arrival.

But at this point, despite the perspective of good business and the rich exchanges that would lie ahead, their desire to return to Spain urged them and pushed them to a quick return.

First Voyage Around the World

That land of Verzin is wealthier and larger than Spagnia, Fransa, and Italia, put together, and belongs to the king of Portugalo. The people of that land are not Christians, and have no manner of worship.
They live according to the dictates of nature, and reach an age of one hundred and twenty-five and one hundred and forty years. They go naked, both men and women. They live in certain long houses which they call boii and sleep in cotton hammocks called amache, which are fastened in those houses by each end to large beams. A fire is
built on the ground under those hammocks. In each one of those boii, there are one hundred men with their wives and children, and they make a great racket. They have boats called canoes made of one single huge tree, hollowed out by the use of stone hatchets. Those people employ stones as we do iron, as they have no iron. Thirty or forty men occupy one of those boats. They paddle with blades like the shovels of a furnace, and thus, black, naked, and shaven, they resemble, when paddling, the inhabitants of the Stygian marsh. Men and women are as well proportioned as we. They eat the human flesh of their enemies, not because it is good, but because it is a certain established custom.
That custom, which is mutual, was begun by an old woman, who had but one son who was killed by his enemies. In return some days later, that old woman’s friends captured one of the company who had killed her son, and brought him to the place of her abode. She seeing him, and remembering her son, ran upon him like an infuriated bitch, and bit him on one shoulder. Shortly afterward he escaped to his own people, whom he told that they had tried to eat him, showing them [in proof] the marks on his shoulder. Whomever the latter captured afterward at any time from the former they ate, and the former did the same to the latter, so that such a custom has sprung up in this way. They do not eat the bodies all at once, but every one cuts off a piece, and carries it to his house, where he smokes it. Then every week, he cuts off a small bit, which he eats thus smoked with his other food to remind him of his enemies. The above was told me by the pilot, Johane
Carnagio, who came with us, and who had lived in that land for four years. Those people paint the whole body and the face in a wonderful manner with fire in various fashions, as do the women also.
The men are [are: doublet in original manuscript] smooth shaven and have no beard, for they pull it out. They clothe themselves in a dress made of parrot feathers, with large round arrangements at their buttocks made from the largest feathers, and it is a ridiculous sight.
Almost all the people, except the women and children, have three holes pierced in the lower lip, where they carry round stones, one finger or thereabouts in length and hanging down outside. Those people are not entirely black, but of a dark brown color. They keep the privies uncovered, and the body is without hair, while both men and women always go naked. Their king is called cacich [i.e., cacique].
They have an infinite number of parrots, and gave us 8 or 10 for one mirror: and little monkeys that look like lions, only [they are] yellow, and very beautiful. They make round white [loaves of] bread from the marrowy substance of trees, which is not very good, and is found between the wood and the bark and resembles buttermilk curds.
They have swine which have their navels [lombelico] on their backs, and large birds with beaks like spoons and no tongues.
The men gave us one or two of their young daughters as slaves for one hatchet or one large knife, but they would not give us their wives in exchange for anything at all. The women will not shame their husbands under any considerations whatever, and as was told us, refuse to consent to their husbands by day, but only by night. The women cultivate the fields, and carry all their food from the mountains in panniers or baskets on the head or fastened to the head. But they are always accompanied by their husbands, who are armed only with a bow of brazil-wood or of black palm-wood, and a bundle of cane arrows,
doing this because they are jealous [of their wives]. The women carry their children hanging in a cotton net from their necks. I omit other particulars, in order not to be tedious. Mass was said twice on shore, during which those people remained on their knees with so great contrition and with clasped hands raised aloft, that it was an exceeding great pleasure to behold them. They built us a house as they thought that we were going to stay with them for some time, and at our departure they cut a great quantity of brazil-wood [verzin] to give us. It had been about two months since it had rained in that land, and when we reached that port, it happened to rain, whereupon they said that we came from the sky and that we had brought the rain with us.
Those people could be converted easily to the faith of Jesus Christ.

At first those people thought that the small boats were the children of the ships, and that the latter gave birth to them when they were lowered into the sea from the ships, and when they were lying so alongside the ships (as is the custom), they believed that the ships were nursing them. One day a beautiful young woman came to the flagship, where I was, for no other purpose than to seek what chance might offer. While there and waiting, she cast her eyes upon the master’s room, and saw a nail longer than one’s finger. Picking it
up very delightedly and neatly, she thrust it through the lips of her vagina [natura], and bending down low immediately departed, the captain-general and I having seen that action.