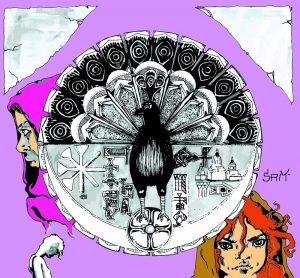 After this God made the form of the seven heavens, the earth, the sun, and the moon. But Faḫr-ad-Dîn created man and the animals, and birds and beasts. He put them all in pockets of cloth, and came out of the Pearl accompanied by the Angels. Then he shouted at the Pearl with a loud voice. Thereupon the White Pearl broke up into four pieces, and from its midst came out the water which became an ocean. The world was round, and was not divided. Then he created Gabriel and the image of the bird. He sent Gabriel to set the four corners. He also made a vessel and descended in it for thirty thousand years. After this he came and dwelt in Mount Lališ. Then he cried out at the world, and the sea became solidified and the land appeared, but it began to shake. At this time he commanded Gabriel to bring two pieces of the White Pearl; one he placed beneath the earth, the other stayed at the gate of heaven. He then placed in them the sun and the moon; and from the scattered pieces of the White Pearl he created the stars which he hung in heaven as ornaments. He also created fruit-bearing trees and plants and mountains for ornaments to the earth. He created the throne over the carpet. Then the Great God said: “O Angels, I will create Adam and Eve; and from the essence of Adam shall proceed Šehar bn Jebr, and of him a separate community shall appear upon the earth, that of Azazîl, i.e., that of Melek Ṭâ’ûs, which is the sect of the Yezidis. Then he sent Šeiḫ ‘Adî bn Musâfir from the land of Syria, and he came (and dwelt in Mount) Lališ. Then the Lord came down to the Black Mountain. Shouting, he created thirty thousand Meleks, and divided them into three divisions. They worshiped him for forty thousand years, when he delivered them to Melek Ṭâ’ûs who went up with them to heaven. At this time the Lord came down to the Holy Land (al-Ḳuds), and commanded Gabriel to bring earth from the four comers of the world, earth, air, fire, and water. He created it and put in it the spirit of his own power, and called it Adam.

Then he commanded Gabriel to escort Adam into Paradise, and to tell him that he could eat from all the trees but not of wheat. Here Adam remained for a hundred years. Thereupon, Melek Ṭâ’ûs asked God how Adam could multiply and have descendants if he were forbidden to eat of the grain. God answered, “I have put the whole matter into thy hands.” Thereupon Melek Ṭâ’ûs visited Adam and said “Have you eaten of the grain?” He answered, “No, God forbade me.” Melek Ṭâ’ûs replied and said, “Eat of the grain and all shall go better with thee.” Then Adam ate of the grain and immediately his belly was inflated. But Melek Ṭâ’ûs drove him out of the garden, and leaving him, ascended into heaven.

Now Gabriel was away from Adam for a hundred years. And Adam was sad and weeping. Then God commanded Gabriel to create Eve from under the left shoulder of Adam., Now it came to pass, after the creation of Eve and of all the animals, that Adam and Eve quarreled over the question whether the human race should be descended from him or her, for each wished to be the sole begetter of the race. This quarrel originated in their observation of the fact that among animals both the male and the female were factors in the production of their respective species. After a long discussion Adam and Eve agreed on this: each should cast his seed into a jar, close it, and seal it with his own seal, and wait for nine months. When they opened the jars at the completion of this period, they found in Adam’s jar two children, male and female. Now from these two our sect, the Yezidis, are descended. In Eve’s jar they found naught but rotten worms emitting a foul odor. And God caused nipples to grow for Adam that he might suckle the children that proceeded from his jar. This is the reason why man has nipples.

From: Sacred Books and Traditions of the Yezidiz, by Isya Joseph, [1919]

Yazidis are a mysterious population defined, to some extent, because of their religious affiliation, rather than their ethnic origins. As far as the latter is concerned, their origin is Kurdish and, within these people, they are a non-Muslim minority, belonging in fact to this sect.
They are located in the north of Iraq, Syria and the South East of Turkey, and some communities have settled in the Caucasus, the former Soviet Union and in some European countries.
Besides Yazidis, the name used by others to refer to them, they call themselves Ezdis or Ezidis. The origin of the word is traced by two hypotheses: it may derive from the ancient Iranian word Yazata (divine being) or from a reference to the reverence that people have for Yazid ibn Mu’awiya, second caliph of the Umayyad dynasty, who took part in the struggle for the caliphate succession and objected to the claims of Hussain, Muhammad’s grandson, killed in the battle of Karbala 680 AD.
Western scholars were always fascinated and attracted by the Yazidis, who also endured bloody persecutions, as still happens nowadays, due to the fact that they were believed to be heretics or devoted to perverse rituals.
An erroneous description of their religion awarded them the false rumor that they were devil worshippers. This resulted from the description that travelers made about them, ignorance and a basic misunderstanding generated by the fact that the worshipped supreme Angel, Melek Ta’us, was redeemed and subsequently became a demiurge creator of the world.
One may say that their religion is not actually well known and much more complex.
The Yazidis’ cultural practices are similar to those of the Kurds. Most members of this group speak the Kurmanji, a dialect belonging to the group of the northern Kurdish, widespread in eastern Turkey and northern Syria, Iraq and Iran.
This language carries most of the oral tradition of the Yazidi religion. Its origins are somewhat complex and of a highly syncretic nature: it picks up elements from various religions and cults born and spread in the Middle East.
In fact, within this language we can find elements and influence of the Sufi Islamic mysticism, as well as of the Iranian Mithraic, Christian and Gnostic ancient cults. To some scholars this religion is older than Christianity, Judaism and Islam, and could be the original religion of the Kurdish people. One could say that the religious beliefs of the Yazidi have developed over time by a complex process of syncretism, along with a system of customs and traditional practices.
From the beliefs’ point of view, for the Yazidis it is more important to adhere to the rules that govern all aspects of life, rather than follow the scriptural texts or dogma. They believe in the soul transmigration, the rebirth of the soul or the spirit in another body, and in the importance of purity, expressed in a caste system, rules regarding food, what is prohibited and what is not, and the preference for living in their community.
According to their view, God created the world and entrusted the care of it to seven Holy Beings known as Angels (haft serr – the Seven Mysteries). In the lead role among these is Malak Ta’us, the Peacock Angel, which is precisely related to Satan from those outside the religion. The world created at the beginning was a Pearl, and after some time changed and it acquired its present form, and the men were created only from Adam.
Yazidis insist on the importance of the oral tradition of their religion: many of the main texts were passed down orally from generation to generation, with the narrative characteristics of this type of culture. Currently the fact that the Yazidi written sacred texts, the Mashafa Res (The Black Book) and Keteba Jelwa (The Book of Revelation), which were published in the early ‘900, were somewhat compiled by non-Yazidis for mutual gain is unequivocally accepted. In any case, in terms of content, the texts actually correspond to the religious oral tradition, and thus keep a value of authenticity.