Home From the World Literatures from the world Rahman Baba: The Poet of Mysteries 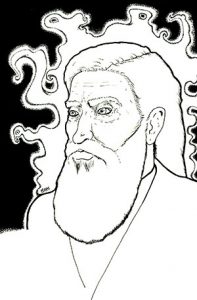 Virtually unknown in Italy, Abdul Rahman Baba is one of the most loved and revered poets among the Pashtuns from Pakistan and Afghanistan.

He was born around 1650 in Peshawar, nowadays Pakistan, that in those times was part of the Moghul Empire. Much of his life remains wrapped in darkness and has been handed down only by a long oral tradition, in which historical facts are mixed up with myth.
For what is known, Rahman Baba was an ascetic member of a Sufi brotherhood, a religious order that practices the mystic dimension of religion.

During the 17th century the Afghans were in the middle of wars in every corner of their country; nevertheless, just when education was the last concern in the life of the people, this poet, who became a legend, was born.

Abdul Rahman is generally considered a saint among Pashtun poets. That‘s why he is called “Baba”, a word that means father, a common title of respect for age or wisdom. No other Pashtun poet has reached Rahman Baba’s universal popularity: he was a great mystic, a source of inspiration for other poets and writers, and an unlimited subject of study for researchers and critics of Pashto language.

Rahman Baba knew the culture, the folklore and both positive and negative aspects of the Pashtuns’ society. He was not a detached and lonely mystic, unaware and blind in front of everyday problems of the people around him. He was a true representative of the spirit of his age: his poetry is a mirror of the virtues and the ills of his time, so much that many of  his verses have become proverbial in Pashto language and are often cited in public speeches or sermons.

The reverence with which Rahman is honoured today does not, however, reflect the way in which he could have been considered during his lifetime. A controversial issue is related to his rejection of the external practices of Islam. In popular tradition it is still believed today that his search for God outside the Mosque and his lack of interest in the formal practices of religion led him several times to clash with the religious establishment of the time.

Rahman Baba’s poetic work shows a subtle use of different languages, including Pashto, Arabic and Persian, as well as an extensive knowledge of history, philosophy and theology.
It’s worth noting that, to be able to write as he did, Rahman must have been instructed both in the Islamic law (fiqh) and in Sufism (tasawwuf).

Although apparently in contrast, the teaching of both disciplines must have been the norm at his time, as it was for other poets, and to receive such an education, he must not have gone  very  far, since Peshawar was beginning to get a reputation as a centre of religious studies, that later would take it to rival with Bukhara.

Rahman was the author of a great number of poems collected in an anthology – Diwan – most of which are written in his native language, Pashto.
The first copies of the Diwan were handwritten, and were widely circulating as early as 1728.

The first printed Diwan was produced in Lahore in 1877. At least three different attempts to collect an anthology from different manuscripts were done.
In some versions the Diwan is divided into two separate volumes (daftar). The poems in each volume are arranged according to the rhyme of the letter ending each verse. The translation of the Diwan into English was limited. Out of 343 poems Henry George Raverty  translated 36, Plowden 35, J. Enevoldsen 50 and A. R. Benawa 12.

Anyhow many translations are of the same poems, so that the total number of the single translated works is only eighty.
The Diwan contains 343 poems. The majority of these are ghazals, their length being between 8 and 12 verses. Six poems are between 40 and 50 verses of length, and the longest is 94 verses.

Following the structure of ghazal, that was refined by Hafez and other Persian poets, each line has two parts (misre) that rhyme with each other only at the first verse. The end of each verse is rhyming, and ends with the same letter of the alphabet.
The last verse contains the name of the poet, following the style used at first by Sana’i of Ghazna.

Rahman Baba has left behind a universal message: his poetry is about love, compassion, peace and humanity.
His work has fascinated many linguists, scholars and researchers attracted by his symbolism and their desire to know the collective wisdom of Pashtun people. The city of Peshawar dedicated to him a mausoleum with a cultural centre.

The garden of existence will not bloom forever!
The market-place of life will not be in bustle always!

Like as the river Abā Sind boundeth along in its course,
With such like exceeding precipitation is the progress of life.

Just as the lightning, that showeth itself and is no more;
So swift, without doubt, is the swift course of life.

It is violent and impetuous to such a degree,
That no one is able to command the bridle of life.

Since its swift steed hath neither curb nor rein,
The brave cavalier of life must have a fall at last.

In a single hour it severeth the friendships of years—
In such wise, unfaithful is the friend of life.

I will neither leave my house, nor will I travel;
For, without going a journey, I pass over the road of life.

It will, in the end, be severed by the shears of fate—
It will not remain for ever connected—this thread of life.

He should view his own self with the bubble’s eye,
If in his heart, one would compute the length of life.

Oh Raḥmān! There is no opportunity in this world again
For him, over whom hath passed away the period of life.

*Taken from “Selections from the Poetry of the Afghans, from the 16th to the 19th Century”, London, Williams and Norgate 1862

Slavonic Tales on The Sacrifice of the Son

Heiko H. Caimi
The album which marks the end of the career for Toto (but at the time of publication Steve Lukather had not yet decided to...

Staff
Lida Yusupova is the author of several books of poetry and prose, including her most recent book of poetry, Shutter (Centrifuga, 2021); The...

Lara Gregori
What is the difference between community and society? As individuals, we recognize that we are part of a society, but every time we reflect...