Home From the World Literatures from the world Sor Juana Ines de la Cruz, or the tenth muse 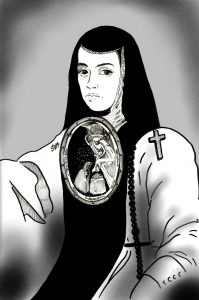 Listen to me through your eyes,
‘Cause your ears are so distant,
Absent with rage
My moans lie in the echoes of my pen;

And since my coarse voice does not reach you
Listen to me, you deaf; voicelessly I am whining.

Sor Juana Ines de la Cruz was a very beautiful woman. Creole, a descendant of the Spanish conquistadors, she was born in the mid- seventeenth century in San Miguel Nepantla , in a central area of Mexico not far from the mountains and active volcanoes of Popocatepetl and Mexico City.

At that time the world was known as the Viceroyalty of New Spain, and within the Spanish colonial empire, this territory could not be defined as neither Spain nor Aztec world but as the historical predecessor, of what we know now as Mexico .

Born as Juana Ines Ramirez Asbaje, the ‘natural (illegitimate) daughter’, of Doña Isabel Ramirez de Santillana, herself the daughter of a major landowner in the area, and Pedro Manuel de Asbaje, a gentleman of whom we know almost nothing.

She became one of the greatest Spanish language writers of her time and hugely contributed to make Spanish literature very popular.

Though her life made her humanly interesting, but it was actually her reputation that still survives today in the greatness and the value of a literary work which expresses her unique intelligence. It belongs to the period of her life spent in a convent, ranging roughly from 1669 to 1691, the year in which, with the Response to Sor Philothea, a touching piece of writing, full of humanity, her activity as a writer suddenly ends.

During her period of activity, Sor Juana expressed herself in all genres of the period with rich nuances and with an intellectual passion that would subsequently cause her considerable distress.

The academics who have approached the writer over time, have often speculated on the complexity of her personality, perhaps not taking into proper account the fact that the influence of society and culture is as powerful as mental and character predispositions in an individual’s own destiny. Part of her personal history is therefore closely tied to the history of the world in which she lived.

Two big enigmas and two drastic and extreme choices are linked to her: the motivations that inspired her to take her vows and those who made her give up writing. While she had a social life, Sor Juana Ines took her mother’s surname, first within her mother’s family and then in the court of the Viceroy, as maid of Leonor Carreto, Marquise de Mancera in Mexico City. Towards the age of eighteen she decided to become a nun, and she remained in the same convent for the rest of her life, devoted to studying, writing and transforming her convent cell in a real cultural salon.

Being passionate about studying and philosophy meant that the convent became the equivalent of a library for her, a refuge and a place to cultivate her intellectual activity.
Juana Ines had a innate inclination towards knowledge and hence refused to marry, declaring to choose the convent because it was the most appropriate way for her to ensure salvation. The convent at that time was a refuge for a woman who was alone in the world, an illegitimate child who didn’t have great financial resources: her case was not uncommon for the habits and customs of her class and era.

She renounced marriage, even though at that time marriage was not a love choice but rather a decision to embark on a particular kind of life: that of a married woman. She loved learning and wanted to devote herself to studying.

At the end of the seventeenth century, Mexico City, which had a heterogeneous population of about 100,000 people (Indians, mestizos ,Creoles and Spaniards), housed in its territory 29 monasteries and 22 convents. For most of the religious people, the choosing the cloister was a career, a profession, not a vocation. Although this does not necessarily mean that it should be a  hypocritical choice. The purpose of convents in society was three-fold: religious, secular, because it gave a job, and social since it developed charity and teaching activities. Thanks to the nuns, in fact, a cultural education for women began to be established in Mexico.

Despite the vows of poverty, in many convents, nuns had annuities, servants, clothes, ornaments and even complex social relationships. Some nuns did not come out of the convent, but inside they could receive visits even from aristocrats and intellectuals, and in some occasions they formed real artistic salons.

Once her obligations to the convent were fulfilled, Sor Juana had a lot of free time, which she devoted to reading, studying and writing. She also cultivated letter writing , and maintained an intense correspondence both in America and in Spain.
Because of her nature, she was anxiously eager to know and be known, perhaps partly expressing a form of personal vanity, but also her loneliness and fear of social isolation. For such a brilliant and lively mind as hers, the convent and even the entire country where she lived were too narrow and limited.

Within Baroque literature’s wider scope, she was a poet belonging to the gongoriana conceptual school, but with a personal interpretation of this style and an innate rationalism that freed her from this its influence.

The craftsmanship and the talent expressed in her work entails aspects of great delicacy and rigor, and even, in some cases of unique originality.

We can recall the little poem The dream in which she expressed, despite the gongoriste stylistic influences, a remarkable originality and a great desire to comprehend the whole universe, and in Response to Sor Philothea, that was actually addressed to the Bishop of Puebla, Father Vieyra, written to defend herself against accusations that her motivations were based on an inadequate study of religion while she took too much huge delight in secular studies such as philosophy .

The typical style of her era was caught with personal taste and sense of proportion by Sor Juana Ines but the originality of her work lies in the perfection with which she was able to achieve the form.

She was an enormously prolific author and wrote plays, comedies and autos sacramentales, ie sung plays; mystical – philosophical prose works, sonnets and poems. In all cases, her work had echoes of such magnitude that she was granted the titles of ‘Phoenix of America’ or ‘Tenth Muse’, making her occupy a very important role in the landscape of literature in the Spanish language, interpreting the baroque in a cultural context that was at the height of the culture of the New Spain.

She was also a skillful painter and executed some portraits. None of her contemporaries made reference to her skills as these were already well known, as well as in poetry, in music and embroidery, even if the theme of illusion and disillusionment of her portraits is recurrent in her poetry. She knew Latin and Latin literature, in addition to Spanish poetry, and Italian poetry, but she ignored French and English (did not read Shakespeare) and hence remained partially closed to other stimuli. Moreover, the Spanish Empire was culturally closed, backward and outdated.

After 1693 Sor Juana seemingly ceased to write, perhaps to avoid incurring additional official censorship, although there are no documents in this regard. She died on April 17th, 1695 during an outbreak of plague. Her image is still imprinted on the side of 200 pesos banknote issued by the Bank of Mexico.

Slavonic Tales on The Sacrifice of the Son