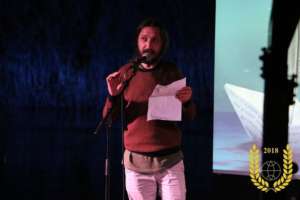 From the first half of September 2018 Inkroci’s rubric “Facing East” will be presenting the translated text and the winning authors of the Enhalon award for young Macedonian poetry – in particular, a poem by a young Macedonian author read at the prestigious Struga Poetry Evenings festival. This prize is one of the awards given at this significant poetry festival that dates back to 1962; the literary event lasts for five days and is held in the town of Struga on Lake Ohrid during the second half of August.

The Enhalon award, reinstated in 2012, aims to support and encourage young Macedonian poets who take part in the festival. It is given for a poem read during the festival programme (including those not yet published). The name of the Enhalon award originates in the ancient Greek name of the town of Struga – Enhalon (which means “eel”) because of the eels that return to the waters of the lake by swimming up the river Tsirni Drim (Black Drim). Actually, the river springs out of the lake itself.

The winning poem at this year’s festival was ‘Just a little prayer’ and was written by the Macedonian poet Mitko Gogov. We offer the translation of the poem to the readers of Inkroci. The English translation has been done by Tom Phillips. The jury points out that “in the living structure of Gogov’s text the significance of each word is equally important and every single thing finds its own place  The lyrical self, starting from his inner world, takes part in the cosmic play where the oneiric and the real are intertwined”.