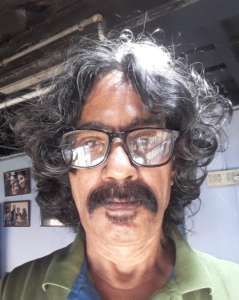 Ra Sh (Ravi Shanker N) has published English-language poems in many national and international online and print magazines. His poems have been translated into German and French. He has published three collections of poetry – ‘Architecture of Flesh’ (two editions) by Poetrywala, Mumbai, ‘The Bullet Train and other loaded poems’ by Hawakal Prokashan, Kolkota and ‘Kintsugi by Hadni’ by RLFPA Editions, Kolkota.

His translations into English include a biography ‘Mother Forest’ (of C.K. Janu, Kerala tribal leader) (Women Unlimited), two collections of poems ‘Waking is another dream’ (Sri Lankan Tamil resistance poems) (Navayana) and ‘How to translate an earthworm’ (an anthology of 101 contemporary Malayalam poems translated to English)(Dhauli Books), a collection of essays ‘Kochiites’ ( by Bony Thomas on the migrant communities in Kochi)(Greenex) and two collections of short stories ‘ Harum Scarum Saar and other stories’( of  Bama, Tamil Dalit writer)(Women Unlimited) and ‘Don’t want caste’ (stories by Malayalam Dalit writers)( Navayana.)
His two books (1) a collection of translated stories from Tamil – “Ichi Tree Monkey and other stories” by Speaking Tiger, Delhi and (2) a play “Blind men write” –to be published by Rubric Publications, Delhi, are in the pipeline.
He has also written many poetry reviews for World Literature Today.

Olga Bragina – There’s no getting out