Home From the World Words from Ireland Brendan MacEvilly – Chauncey 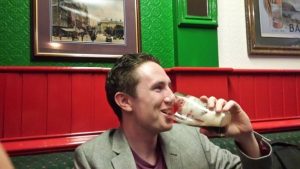 It is with great pleasure to introduce Brendan Mac Evilly in this issue of Inkroci and to feature an extract of his story “Chauncey” – a Dublin story if ever there was one.  We meet the eponymous hero in his daily moment of glory in the one of Dublin’s oldest and best-known public house and become inveigled into the bar as a spectator.

With a tongue-in-cheek humour that is reminiscent of the satirical writer and journalist Flann O’Brien, the author delivers a hilarious tale with a style and aplomb that belie the fact that this is his first published story.

Director of the Irish Writers Centre

Other names given Chaucey:
Reverential: The Holy Ghost (Chauncey is a great man for people claiming to have seen him when, in fact, they haven’t); Moses (of course, a great walker); Lazarus, Methuzelah (not very original here, a name most middle-aged Irish men respond to); Zacchaeus (Dubliners have always been hard on those tight with their scratch, though to be fair to Chaunce he never found much use for it); Peter (there was the time that one soused fool claimed to have seen Chauncey walking on water; it was later established that he was, in fact, standing in a shallow puddle, but the name enjoyed a period of fashionability); Bud (after Buddha, another great man for the walks).

So Chauncey is looking for Deasy. Deasy is a man who is enormous. At the time in question, while Chauncey is searching the streets, Deasy is sitting opposite a blank-faced gentleman named Anatoly Karpov. Karpov and Deasy go back years. Apparently. Unbeknownst to Chauncey, they’re just across the road in The Library Bar of the Central Hotel, a chessboard laid out on a low-set table between them. Karpov wets his lips between moves with a neat double vodka, the cool fucker. Deasy’s pint is going stale.

This extract from “Chauncey” is published with kind permission of The Stinging Fly. The full story appears in the current issue of the magazine (Issue 28 Volume Two/Summer 2014).

The Stinging Fly was established in Dublin in 1997 and aims to publish and promote the very best new Irish and international writing.