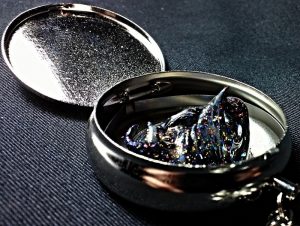 I have to say I was sworn to secrecy of course, my boss insisted on that. So that makes it, to say the least, difficult maybe even impossible for me to be totally honest about what happened, let alone how I felt about it which was complicated. I have to say straight out that I was brought up a Catholic. Which is like even more complicated if anything. So to make a long story short we found it easy enough once we knew what we were looking for. He didn’t tell me of course. I’m only the technician and techies never hear the big picture. But he had the whole game-plan nailed to the last letter. I have to say I have massive admiration for the boss. The day of the final press-conference was a total blast for everybody, yours truly included. The media all expected a thing like an organ and there was research that looked at the brain of course using PET scans and all that other stuff but they were all wrong, he knew it all along that they were totally out.

Pina Piccolo
I would have liked to be patti smith. Locks of rebellious gray hair. Indomitable gaunt visage. The jacket: the worn-out one from Horses that dangles carelessly from a shoulder. And to continue tapping with your slim...