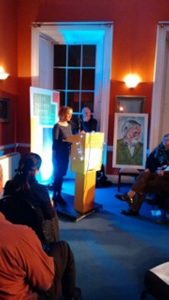 Here at the Irish Writers Centre, we are always looking for new ways of supporting writers in their work. In my role as director, I hear time and again that there are certain things that writers value most: money, time and space to write. Of course, the money issue is not just confined to writers but the time/space issue is one that we can address, and have consequently devised a professional author’s bursary. The first provision of its kind for the IWC, we have named the scheme after IWC founder Jack Harte, a writer who richly deserves recognition for his contribution to Irish literature. In collaboration with the wonderful Tyrone Guthrie Centre we have arranged for the bursary to be awarded for one writer to spend two weeks in the idyllic Monaghan artists’ retreat simply to write. http://tyroneguthrie.ie/home

Selected from an impressive field of applicants, the successful bursary recipient is Liz Nugent, a rising star whose first novel Unravelling Oliver wowed readers and critics with its skilful characterisation and agile plot twists. Even a very short piece such as Liz’s flash fiction piece Van Gogh is enough to reveal an incisive wit and a blithe ease with dialogue. Reminiscent of Niccolo Ammaniti’s simplicity of expression, her clean language is well-suited to act as a starter novel for non-native readers of English, and her stories will keep the most accomplished of readers captivated.

I have little doubt that her second novel, (provisionally entitled Liars) will be even more successful than the first. We are thrilled to present Liz to an Italian audience and encourage you to boast to your friends that you discovered her here first.

I was really honoured and delighted to be awarded the inaugural Jack Harte bursary from the Irish Writers Centre in partnership with the Tyrone Guthrie Centre. Jack Harte is a legend in Irish literary circles and has probably done more for Irish writing than any other individual.

The award itself takes the shape of a two week residency at the Tyrone Guthrie Centre by the lake at Annghmakerrig in Co. Monaghan. I will get a beautiful room in a fine stately home in which to write. I wrote most of my first novel Unravelling Oliver/ Il Mistero di Oliver Ryan there. There is something magical about a place of such tranquility and beauty where I don’t have to worry about the pile of laundry, the shopping list or what I will prepare for dinner. The only rule in TGC is that all of the artists must come together for dinner in the evening. I have made many friends around that dinner table and the encouragement you can give and receive is priceless. The atmosphere is always one of benevolent creativity. We all know how privileged we are to be there. And of course the rumoured ghost of Miss Warby, a former resident, keeps me alert. I imagine she disapproves if I don’t reach my daily word count target.

Here is a short flash fiction piece that has just recently been included in a collection called 100 words 100 books published by the O’Brien Press and selected by the Book Show on RTE Radio 1, the Irish national broadcaster:

I have red hair and one ear. Since my boyhood, they have nicknamed me Van Gogh. They think it is funny.

Because of my missing ear, I only hear it half as much as they say it. I have disappointed everybody by being unable to draw or paint. I tried, when I was younger, but was not successful. They were even more amused.

In spite of my deafness, I sing. They tell me not to. They tell me it is painful to their ears. But I insist on it, regardless. It is my revenge.