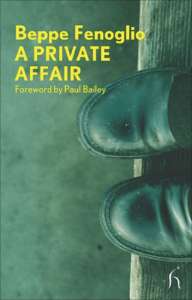 Love and war: two words that seem to contradict each other. However, never have they managed to coexist so harmoniously as in this book. After the success of Johnny the partisan, Beppe Fenoglio, one of the most famous partisan writers, embarked on this enterprise that aimed more to construct a coherent story than to recount memories.

On the surface, the plot may seem very simple.

Milton is a partisan in the Langhe in Piedmont, in the Badoglio group. The novel opens with him standing open-mouthed, arms hanging limply by his sides while he observes the country house where until recently Fulvia, the woman he loves, used to listen to him speaking of love through the translation of the lyrics of English songs. The god of English, she called him. But Fulvia went back to Turin, and young Milton doesn’t know anything more about her. The housekeeper causes him searing pain by describing to him the secret love affair between Fulvia and Giorgio, Milton’s partisan comrade and childhood friend. From now on the young man’s sole preoccupation will be to find out the truth (a recurring word in the book) from Giorgio, but he will later come to learn that his comrade has been captured by the fascists.
In a certain sense, A private affair is a novel about searching. The personal quest for truth, or love, intersects skilfully with the partisan purpose, that of war. Milton does fight, and risks his life to rescue a companion from certain execution, by attempting an exchange; but the only reason he wants Giorgio to stay alive is to find out about his affair with Fulvia.
The two quests become intertwined in a dance of fog, mud and exertion. The descriptions of the Langhe are beautiful: a landscape that appears motionless, foggy and oppressive, perfectly in tune with Milton’s own mood.
There is a lot of hate scattered throughout these pages: hatred of the war, of hunger, of death. The penultimate chapter hits directly at the heart: it is almost a short story in itself, where Fenoglio abandons Milton and takes us to observe the execution of two very young boys, Riccio e Bellini, captured and shot by the fascists.
It is an event that was perhaps squeezed a little unnaturally into the story; but it has the function of reminding us that, in addition to Fenoglio the writer, there was−and still is−Fenoglio the partisan, who could never accept the tragedy of the desperate brutality that was part of the Resistance.
A private affair is simply a small masterpiece, where nothing is left to chance and where great importance is given to the theme of the consequences of one’s actions, for better or for worse. The Resistance is the stage where man is represented in all his entirety.