Home Reviews Look out for the book Ada Gobetti – Partisan Diary: A Woman’s Life in the Italian Resistance 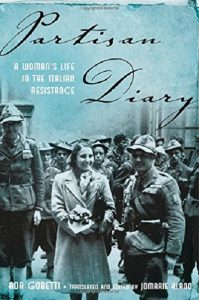 The brave everyday life of the Resistance

Ada Prospero was the wife of Piero Gobetti, an Italian journalist and politician who, in 1926, died very young after being attacked by a group of Fascists. She wrote one of the milestones of Italian Resistance literature: Partisan Diary. It is not a novel, but a true reconstruction of events that Ada sketched in a notebook until 1945, written in cryptic English.
The diary begins after the tragic 10th of September 1943, when Turin is occupied by Nazi Germans. Italy’s former allies have now become the enemy and Ada, together with her eighteen-year-old son Paolo, is working to form the partisan movement and the ‘Action Party’.
In these pages, the everyday life of those years is meticulously described, including the struggle against hunger, the constant fear of bombardment and imprisonment, the need to take care of fleeing soldiers and to bring them food and clothes, and the task of managing the underground press: in short, the daily routine of the Resistance, made up of uncertainty but also of the will to actively work, which is juxtaposed with the passive and tired resignation of the Italian people that Ada describes in the first pages of the book.
What forcefully emerges from this text is the fortitude of those who participated in the Resistance and the power of their beliefs: they wanted an Italy that was free from the Nazi-Fascist occupation. Human empathy is, however, never overlooked: Gobetti has an honest eye, and recognises in her enemy a human being and in her comrade a friend.
It is this honest and transparent attitude that makes the book so important. Everything is here: from her concerns as a mother to the courage she shows whilst in action, from her personal sorrows to the discovery of her own weakness. Most of all, there is the desire to create something new, a hope for the future. Towards the end of the book another problem emerges: the need to maintain this newly-won freedom. No achievements are permanent and in the post-war period Ada did not leave politics, but went on to be one of the first women to hold political office.
For the first time, the endeavours of women during the Resistance, whether soldiers or dispatch riders, are described in a book. These women’s virtue left an indelible mark; for too long they have remained in the shadows, and now it is time to remember them.

Alessandro Abbate – Paradoxes of writing and other stories