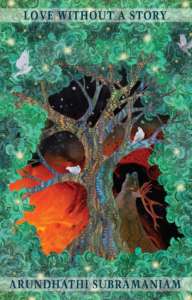 The title of Arundhathi Subramaniam’s adeptly wrought, and wide-ranging collection immediately begs a question. Or several questions. Can there be such a thing as love without a story? Love without – outside of – time, change, place, individuals and all the other attributes of a story, of a constantly unfolding and developing narrative? And if so, what exactly would love without a story be? A transcendent, metaphysical state? A theoretical concept? A Platonic form? Perhaps even Dylan Thomas’ ‘The force that through the green fuse drives the flower’?
The collection’s title is itself taken from ‘The Fine Art of Ageing’, one of the longer poems here – a poem that addresses complexes of emotion and experience around such fundamental themes as time, death and love through the persona of Avvaiyar, ‘legendary poet and wise women of Tamil literature’. She’s a figure who ‘lives in a face/where the civil war/is almost over’, an image which perhaps suggests all the contending energies and forces we are subject and heir to and which also require of us – or generate within us – acceptance, resignation, resilience. And it is here, as Avvaiyar emerges into a state where she has ‘Nothing to declare any more …/not even nostalgia’, the third section of the poem concludes:

For lovers flatten
into photographs,

And then what’s left?

Perhaps just the oldest thing in the world –
love without a story.

This might, in a way, remind us of the ‘almost-instinct’ that Philip Larkin proposed might be ‘almost true’ in ‘An Arundel Tomb’ – that ‘What will survive of us is love’ – and yet Subramaniam’s lovers are not memorialised in ‘stone fidelity’ as Larkin’s are; they disperse into ‘quiet’ and fade, disappear from their own story. We are perhaps closer to Auden’s famously adjusted and/or line in ‘September 1, 1939’: ‘We must love one another and die.’ Subramaniam’s thought seems to hover between a melancholic recognition of our all too mortal transience and a sense of something universal that both precedes and survives us, ‘the oldest thing in the world’.
At the same time, however, ‘Love without a Story’ is replete with stories. ‘The Fine Art of Ageing’ itself evolves into a narrative about Avvayiar’s encounter with a ‘boy god’ anchored in Indian myth that invites an allegorical interpretation, while elsewhere in the collection we are given glimpses of other stories, other less mythic worlds, often in the form of vividly realised memories. In ‘Deleting the Picture’, ‘past the clumsy brutality/of eighteen’, Subramaniam recalls:

Or in ‘Conversations’, remembered shared dialogues ‘that rose/like yeast and melted/like butter in Irani restaurants in Bombay’. In ‘The Need for Nests’, too, a love appears that is very much with a story, even if we, as readers, can’t do more than imagine its contextual narrative:

and the friendly dialogue
of slumbering breath,

and the promise of laughter
in the morning.

At the same time, Subramaniam deploys language and prosody in ways that bring an unusual energy to the work. Often writing in relatively short lines, frequently arranged in two- or three-line stanzas, she imbues the poems with rhythms and sounds that are simultaneously controlled (in their effects) and somehow open, at ease.
Her ‘Song of Catabolic Woman’ – catabolic being a chemical term relating to the breaking down of complex molecules – ranges across lexicons, but is held together with a punchy lyrical rhythm that recalls, not only ballad form, but performance-oriented spoken word:

Similarly in, ‘Let me be adjective’, the words build into taut sonic patterns reminiscent of inter-war modernist experimentation:

To read Love Without a Story, then, is to be in the presence of a poet who is capable of rendering the physical and the everyday with a sort of sensual plenitude whilst at the same time exploring connections outwards onto more transcendental, sometimes mythical planes where a ‘Goddess’ becomes “the shockingly naked wire/at the centre of the world//where your future is a long burnt-out/morning star”. Towards the end of the collection, Subramaniam’s two ‘Memo’ poems seem to represent notes-to-self, not merely a reminder, but in many ways a preliminary description of what makes her own work engaging and vital, created, as it is, among “Not the conference/of hungry eyes,//but the fellowship/of those who stand aslant,//multilingual,/listening.”