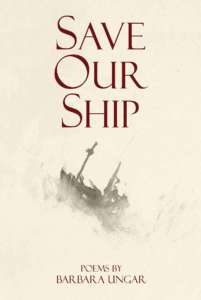 Barbara Ungar’s impressively wide-ranging collection is prefaced with two aptly chosen epigraphs which serve to introduce the philosophical terrains across which many of these poems travel. The first is from Czeslaw Milosz: ‘Language is the only homeland’— which brings with it notions of language as both common ground and sanctuary, as well as the dual experiences of feeling both ‘at home’ and ‘homeless’. The second is from Bernadette Mayer: ‘Everywhere there is has everything there is to look at’ – this one, perhaps, pointing us towards a sense of place as somewhere inviting potentially endless discovery and reflection.

Certainly, Ungar’s poetry explores the idea of home and homelands in various ways—whether that’s the ‘cupboard’ a first boyfriend settled for instead of ‘the very palace/where this young couple shines/arrogantly beautiful and clueless’ (‘Wedding with First Boyfriend’), the true-imagined ‘other place’ inhabited by Emily Dickinson rather than ‘the cramped rooms in Amherst’ (‘Emily Dickinson’s Estate Sale’), the ‘smallest house/empty and shining as a shell’ where ‘another Barbara [is]/euphoric just to be’ (‘The Other Barbara’) or, more broadly, the home we all share, planet Earth, the damage we’re doing to which surfaces in a number of eco-minded poems including ‘Endnotes to Coral Reefs’ and ‘Global Weirding’.

Likewise her interest in the possibilities of poetry and, by extension, language is evident from her adept deployment of different forms and approaches. As well as the neatly wrought quatrains of poems like ‘Lot’s Ex’, the haiku-like tercets of ‘Interior Paramour’ and a sestina relating to iguanas, there are more expansive forms, like the long-lined ‘Maria Lactans’ (with its almost Ginsberg-esque opening ‘Mothers of America, nurse for as long as you like’), prose-poems like ‘How It Happens’ and ‘Sheer’, and more conceptual pieces like ‘Elegy’, the aforementioned ‘Endnotes’ and the opening ‘The Diverse Vices of Women, Alphabetized’, the translation of a misogynistic fifteenth-century text by Archbishop Antoninus of Florence, which here serves to highlight the dangers that language can pose if it’s weaponised.

Ungar’s own attentiveness to language is also evident throughout: in the crystalline, aphoristic reported speech in ‘Dear Bill’ (which includes such gems as: ‘The only difference between being/moderately well-read and really well-read is insomnia’); in the adroit patterning of sound throughout; but also in the rich span of her vocabulary and its often sparklingly deliberate precision, something that’s perhaps most effectively illustrated by simply citing ‘Venus with a Mirror’, an ekphrastic poem responding to Titian’s painting, which wryly— and colloquially— notes: ‘Behind her/a cherub’s about to bonk her over the head/with a wreath’.

By turns melancholic and defiant, witty, wistful and compassionate, ‘Save Our Ship’ has that combination of seriousness and playfulness (serious playfulness and playful seriousness), which has been such a defining feature of much of the best American English-language poetry that runs in the same vein as that pursued by— amongst others— Elizabeth Bishop and Frank O’Hara. It’s a collection that’s well worth tracking down and one which continues to engage— and surprise— with every reading.