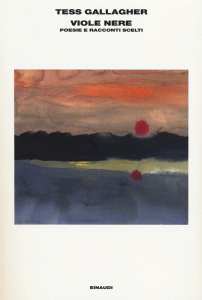 Black violets is a collection of seven short stories and fortynine poems.

It’s a book born on a dangerous tree: the family connection with Raymond Carver, named by many people as the master of new american fiction. It is difficult, nearly impossible, to avoid comparison. Tess Gallagher, Carver’s wife until the writer’s death in 1988, is mainly a poetess. Her poetical production is considerable, at times extremely intense and full of images; to feel: this is the verb that prevails more than any other thing, when you read her.

But in this book the author doesn’t pass the “short stories’ test”.
The characters of Tess are Carver’s ones: men and women described during their everyday life, linked to their ordinary lives, whose fragments are portrayed when they look out onto a abyss.
The ability of Carver has always been not to show their downfall, leaving it to reader’s intuition; all the unsaid fills and overflows from his pages.

This is what Tess tries to do: she tries not to say. And, unfortunately, manages to do that even too well, anchoring her own short stories and not succeeding in spreading them into the reader’s heart. Once the reader comes to the conclusion of the book, all that remains is a vague feeling of confusion.

Her style is pitifully imprecise. Words (the only thing we have, Carver used to say) are not selected.
All that is evoked, truly and honestly, in her poems, is not transfered in prose by Tess Gallagher, so that she overwhelms the prose itself with a tone perceived, clearly, as extraneous.
The last short story marks the ruinous fall of the collection. It is the correction of a report, as the author declares in the first line. The report, she continues, is about Mr Gallivan, a lousy writer in search of celebrity. The report is Cathedral, one of the most famous short stories by Carver, a real masterpiece.
This is a trial that only a suicide writer should have engaged: in this case, as if there were any real need, the distance becomes sidereal. As a matter of fact, Carver succeeds in giving a moving depth to the visit of a blind man, whereas Tess makes a useless and strained effort to correct mistakes by Carver-narrator, and forces us to make a comparison.

There is something excessively hurried in her writing and in the end the main theme, the ethical one, is lost. Her short story has no ending, nothing happens and nobody learns anything.
What remains is the vague feeling that if Tess hadn’t tried so hard to imitate her husband’s style, we would have read her writings more willingly.
Once the last page is turned you feel like saying : Play it again, Tess.