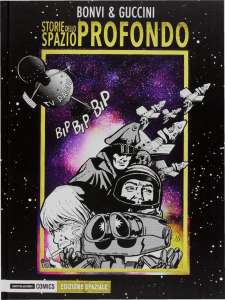 Francesco Guccini’s raids in comics art ain’t uncommons, aid and abet his own friends like Magnus, Andrea Pazienza and Bonvi himself often assisted Guccini. In Storie dello spazio profondo (Deep space stories), Bonvi throws his own genius, pencil, and literally face in, using his own image drawing the main character. Guccini throws in his poetry, his irreverent irony and his character, giving it to the robot’s personality, main hero’s “faithful” friend.
Published between 1969 and 1970, the ‘pamphlet’, as Guccini refers to it in a later interview, it’s based on seven episodes. It has its first line on an overpopulated world, where psycho-police severely punish every little individuality signal. Psycho-police uses conditioning rays, and immediate expulsion to protecting the community.

Guccini and Bonvi, not even thirty-years old, they show their abhorrence to human stupidity: funny the raid in the first episode called Galassia che vai… (When in Galaxy, do as…), about an unlikely ‘vannabe master of all universen’[1] (Sturtmtruppen strips will only see the light one year earlier), and the passion for revolutionary issues, both political and social, are book funny topics. To all this, and much more, it’s unleash spatial misadventures of the young crook, with an heroic past, and his robot assistant. The two do it with the typical young saplings effrontery, likely to be in prominence.
Authors talk us also about their own passions, like in the episode called Vivere ricchi e felici (Living rich and happy). Authors, which during that time they had a strong fascination for independent shows, and co-workers in ads, they funned themselves with their alter-egos, putting them at the head of a ragged radio station, from which advertised a non-existent product, the Pyrulatium.

The grand finale episode is, Chi cerca trova e i cocci sono i suoi (Seek and ye shall find, you bought it). In this episode a gostly religious cult recognizes, in the two unkempt heroes, the chosen leaders to reach the Promised Land, and maybe they will find it. A timeless book to read over and over, full of never predictable nor banal quotes; A rich in ideas book, not only about our future, but primarily about our present. Memorable.

[1] In Italy there’s a funny and desecrating idea, according to which german often german words are simpli italian words with with an -en in final, so Universe – Universo in italian, according this idea, in german it would sound like universen.